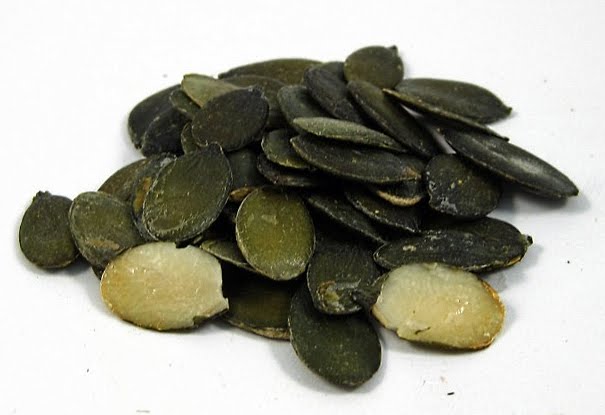 To a list which includes saw palmetto and flax seed for BPH:
Add pumpkin seed:

This is another randomized, double-blind, placebo-controlled trial. You don't get better than this when studying the effectiveness of a drug. And it was long for a study like this, a year.

There were four groups:

International Prostate Symptom Scores: Symptoms in Groups B, C, and D were significantly reduced after three months. Group D showed the most improvement. Interestingly, Group D showed continual improvement over time. So, the longer they took pumpkin seed/saw palmetto, the better they felt.

Quality of Life Scores: Improvements in Groups B, C, and D. Group D showed the most improvement, and again, they improved continually over time. (The placebo group's score was unchanged over the 12 months.)

Serum PSA Levels: Only Group D showed a reduction in PSA levels, up to about 50%.

Prostate Volume: Groups B, C and D showed a gradual decline in size over time. (The placebo group remain unchanged.)

Maximal Urinary Flow Rate: Group B was significantly increased after 3 months; Group C after 6 months. Interestingly, Group D showed no improvement, but this could have been influenced by the participants' higher age (see comment below*). The placebo group experienced a worsening of urinary symptoms, flow rate decreased 22% over a year.

* One drawback to this study was its small number of participants. In randomization, population characteristics cannot be ensured across groups. More participants mean more similarity across groups. It would be better if all groups had, say, the same percentage of people who were obese. In this study, Group D's average age was significantly higher than Groups B and C. This may have been why Group D did not show even better outcomes for combination therapy, which one would expect. (Of course, age may not have had any impact, but you can't tell from this study.)

Why would you expect that combination therapy would be better? Because pumpkin seed oil and saw palmetto oil have different mechanisms of action, they work to improve urinary symptoms in different ways:

Pharmaceutical drugs like Flomax are potent and can relieve symptoms overnight. Plant-based therapies (phytotherapies) take several weeks to show effectiveness, but do so without the cost and side effects of drugs. They may also be better choices for long-term use.

Indeed, in this study:


"PV [prostate volume] and MFR [Maximal Urinary Flow Rate] measurements started after 6 months because the urologists advised that there would not be a significant change over a short period such as the first 3 months of treatment."

It is such a nice and informative blog about pumpkin seed oil.In this blog they give lot of benefits while using the pumpkin oil.It increases the vitamins B1,B2,B3 and D minerals.

I'm not surprised to read this. I take Super Beta Prostate which contains beta sitosterol, a phytosterol or plant fat, derived from vegetarian sources like pumpkin seeds. There are a lot of studies that support beta sitosterol's ability to promote prostate health and urinary flow and functions.