Attenborough Crawls To A Baby Rhino


"At the end of the final episode, to be shown on Wednesday night, Sir David is shown in perhaps some of the most personal and moving moments of his career. The closing credits show the 86-year-old presenter on his hands and knees exchanging "squeaks" with a blind baby rhino.

Asked if he had ever cried after seeing an animal suffer, he replied: “Oh of course. I’ve been deeply moved and upset and worried. How can you not be?”

But he said it was not appropriate for a presenter to show emotion: "That’s making an exhibition of myself and that’s not what it’s all about.” "

Here's the video (or at least the link to the video, I can't embed it) of Attenborough engaging the baby rhino. I love his curiosity and his tenderness. 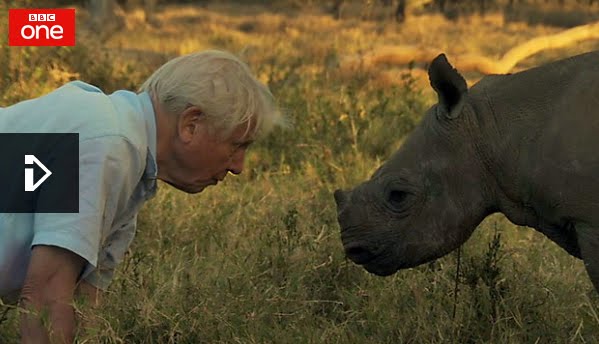 The rhino isn't in a zoo; it's in the wild. That's what makes this even more fascinating.

Zoos are all kinds of wrong. Keeping any animal locked up against its will is wrong.

I love David Attenborough. He's brilliant. Here's a link to the newspaper article (it's also not active on your blog, for some reason). http://www.telegraph.co.uk/earth/earthnews/9840865/David-Attenborough-admits-crying-over-animals.html
I had no idea he's 86--good for him!

I agree with you that in principle, zoos are unethical. But do you think that, when a species in going extinct b/c of pressures (usually human-made) in the wild, that it's preferable to let them die out, rather than trying to preserve them in a zoo? Just curious--I'm not sure what I think, though my tendency would be to try to preserve them then release them back into the wild if that were possible, which sometimes it may not be. Human animals are the ones who need the most controlling, imo.

I don't know. We take away their feeding ground. We kill them for food, or for ivory and fur, or for sport, or by carelessness, as in fish by-catch. So we round up a few and put them on a reservation or zoo so we can "preserve" them? I don't know.