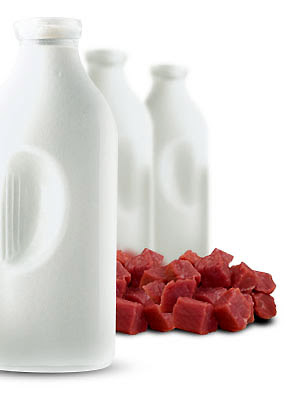 A new study links, yet again, pesticide levels in humans with diabetes. Milk and meat have some of the highest levels of pesticides.

Those with the highest levels of certain pesticides in their blood had an over two times! higher risk of diabetes than those with the lowest levels. The strength of this association is leading researchers to conclude a cause-and-effect situation.

Here's Dr. David Jacobs, professor of epidemiology at the University of Minnesota:

"I fear that the association of chlorinated persistent organic pollutants with diabetes is causal. There is a large scientific background of cell-based and animal research that shows that these compounds disrupt endocrine (hormonal) function."
- More Evidence Links Pesticides, Diabetes

I've worked in diabetes for over 15 years, and this link with pesticides has always been discussed, but there's more research data accumulating. One point I often mention - that animal products harbor the highest levels - was also mentioned here:

"Diet is the main potential source of exposure, according to the Centers for Disease Control and Prevention (CDC) -- with fatty foods, like dairy products and oily fish, topping the list."

"Experts say that one way to limit your exposure to the chemicals is to limit the animal fat in your diet."

"[These] pollutants impair the body's ability to regulate blood sugar."

"Some of the compounds also have been shown to promote obesity."

Ironically, people with diabetes who try to control their blood sugar by reducing carbohydrates end up eating more animal foods and fatty foods, both of which add to their pesticide burden more than the carbs they shun, making blood sugar that much harder to control.
________
Posted by Bix at 7:43 AM

For what its worth, here is a link to another study linking red meat to type 2 diabetes.
http://blog.usfoodsafety.com/2011/08/22/red-meat-linked-to-increased-risk-of-type-2-diabetes/

"Beans and greens" sounds better all the time.

And whole grains. Beans & greens for sure though.

Very interesting article with medical insights. There's no way I'm not sharing this, thanks.