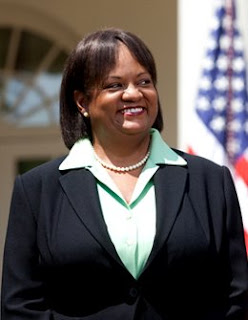 If obesity and overweight are primarily a result of an individual's choices, why has Dr. Benjamin, an intelligent woman, someone who knows the health costs associated with obesity, someone who has a family history of obesity-related illnesses in her family (high blood pressure and diabetes), and is on record as calling them "preventable diseases," now someone who has been selected as the nation's premier advocate for public health, made the choice to be overweight?

Update: I should say where I stand.

I may be in a minority, but I don't believe obesity stems primarily from an individual's choices.

I may not be in the minority in the UK, however, where personal choice's role in obesity is considered just one factor among others, including class, location, and time (time in history, as in "the Britian of today"):

"Although personal responsibility plays a crucial part in weight gain, human biology is being overwhelmed by the effects of today’s ‘obesogenic’ environment, with its abundance of energy dense food, motorised transport and sedentary lifestyles. As a result, the people of the UK are inexorably becoming heavier simply by living in the Britain of today. This process has been coined ‘passive obesity’. Some members of the population, including the most disadvantaged, are especially vulnerable to the conditions."

"The evidence is very clear that policies aimed solely at individuals will be inadequate and that simply increasing the number or type of small scale interventions will not be sufficient to reverse this trend."
- Tackling Obesities: Future Choices - Summary of Key Messages, Government Office for Science

Not to say individual responsibility doesn't count, but there are strong social and political forces acting against personal choice.
________
Posted by Bix at 7:43 AM

So, you're asking us why she's made the choice to be overweight?

For most people, that choice comes down to either eating too much or exercising too little, or a combination.

Perhaps she's revealed elsewhere the rationale for her choices. But I don't know where.

after a brief review of your blog, on which I saw that you subscribe to the Energy Balance Equation, may I respectfully suggest that you've missed the point of Bix's post.

I think zim got me, but maybe I was too cryptic. I guess I'll use more words.

i agree with your update, and can't think of any more words.