How Many Minutes A Day Do You Spend Eating (Chewing)? 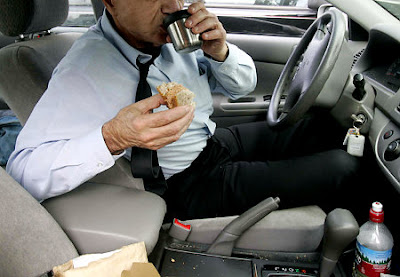 Some perspective, via Wrangham's Catching Fire:That last point is one reason, argues Wrangham, that humans did not evolve to eat a raw food diet. We didn't have the time to eat plus do all the other things we were doing - hunting, setting up food economies. It's also a reason why humans are not carnivores:

"When eating muscle, chimpanzees are forced to chew it slowly ("their teeth cannot cut meat easily, their mouths are relatively small, their stomachs do not process hunks of raw meat efficiently"), taking as much as an hour to chew one-third of a kilogram (three-quarters of a pound)"

This puts the raw food, vegan Evo Diet into better perspective. It may be effective for weight loss, but it's probably not the diet humans evolved to eat.
________
Results of chewing poll:

How many minutes a day do you spend eating (chewing)?

*sigh* Everything to do with food, it seems, is because we're becoming a more fast-paced society.

Chewing is very important to digestion and benefits many people; I know for those of us with chronic digestive disorders, it aids with smoother transition through the tract and if you eat slowly, consciously & properly (read: not in front of a TV), I find I recognize when I get fuller, sooner.

I think the way Wrangham phrases his argument--that "humans did not evolve to eat a raw food diet"--is a problematic phrase. That is, at some point early hominids discovered that food that got fried in a fire (maybe a grass or forest fire) could still be eaten, actually tasted good, and was easier to chew. Hence said hominids made conscious choices (a "teachable moment"!) to seek out food in burned-over areas and to cook food once they knew how to control fire.

I'm not sure I would characterize such a conscious choice, which is then taught to succeeding generations in a social/cultural context, as "evolving" to eat a raw diet, a term that suggests physiological/genetic difference. I'm not criticizing Wrangham's interesting research, or his conclusion, but simply his characterization of it as "evolution." If we actually had evolved physiologically/genetically to be incapable of eating raw food, then the raw-food movement couldn't exist.

My husband, a physiologist and comparative anatomist, says this is a classic disagreement in the history of ideas about evolution (ie, whether learned, taught behaviors become genetically incorporated in succeeding generations, or whether it's just a case of changing cultural mores).

"If we actually had evolved physiologically/genetically to be incapable of eating raw food, then the raw-food movement couldn't exist."

This is his argument exactly, that we have evolved to be incapable of surviving, as a species, on a raw food diet.