African Chickens Added To List Of Animals That Reject GMOs 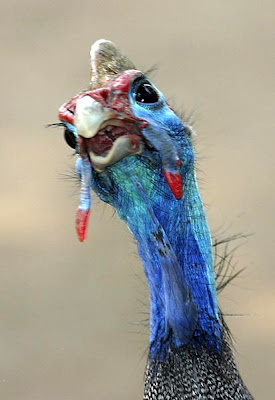 Remember my posts from 2008 where I recounted Jeffrey Smith's stories about cows, hogs, and geese that rejected genetically engineered corn and soy?

"Strilli Oppenheimer was recently approached by Dawid Klopper, the head gardener at the family estate, Brenthurst, informing her that her indigenous African chickens were refusing to eat the mealies in the chicken feed bought from a large supplier. Concerned that the birds may be ingesting genetically modified maize, she instructed Klopper to have the maize tested.

Oppenheimer stopped consuming the home-grown eggs and the maize was sent to the GMO testing facility at the University of the Free State for analysis.

The results confirmed Oppenheimer's initial suspicion - the maize had been genetically engineered to produce proteins that are toxic to certain insects and weeds.

"It contained BT1 which makes the maize insect resistant, as well as Roundup which makes it weed resistant. This is the first report we have had of chickens not eating GM feed," said a GM expert.

While small quantities of BT1 and Roundup weed killer were found in the seeds, the concern remained with the cumulative effect of GM feed, not only on the chickens, but also on the eggs they produced for the family." 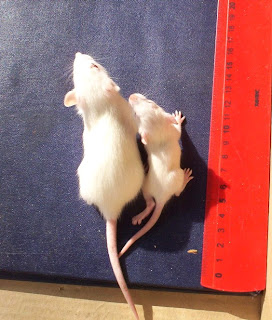 The FDA does not require labels on foods that contain genetically engineered ingredients because they claim, "bioengineering does not make a food inherently different from conventionally produced food.":

"Consumer: Why doesn't FDA require companies to tell consumers on the label that a food is bioengineered?"

"FDA: We are not aware of any information that foods developed through genetic engineering differ as a class in quality, safety, or any other attribute from foods developed through conventional means. That's why there has been no requirement to add a special label saying that they are bioengineered."
- FDA Consumer, "Are Bioengineered Foods Safe?", January-February 2000.

(FDA seems to have removed this link, however, the entry in the Federal Register upon which this statement was based is still obtainable: Statement of Policy - Foods Derived from New Plant Varieties, FDA Federal Register, Volume 57 - 1992.)

About that photo of 2 rats: The smaller rat on the right was fed GM soy. The rat on the left was not. The rats are the same age. See: Disturbing Findings In Rats Fed Genetically Modified Soy.

Somebody needs to inform the cows, hogs, geese, chickens, and rats that there's no difference.
________
Photo of an African chicken, or guineafowl, from Wildlife Pictures Online. I love this photo not just for the unexpected brilliant colors of the bird, but for the close-up of its teeth. Wow. The caption: "Helmeted Guineafowl (Numida meleagris) close-up showing its brightly-colored head and neck, Kruger National Park, South Africa. © Scotch Macaskill"

A simple rat test reveals the dangers in GMO. The FDA is lying to us through their teeth. They have been bought out by corporate agriculture and are willing to let people suffer debilitating diseases and die to protect the corporate profit. The love of money is truly the root of all evil. This is becoming more clear to me now.