In Search Of The Mediterranean Diet 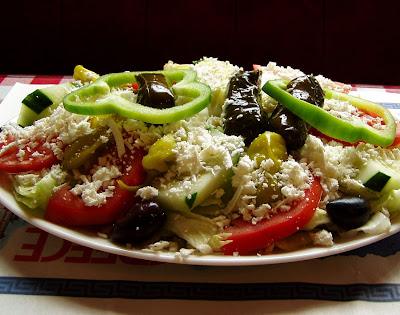 I'll be honest. I don't know what the "Mediterranean Diet" (MD) is. I know there's some olive oil in there, fresh fruit, wine (red?), vegetables, and a few bean dishes. But I couldn't come up with a weekly menu easily. What does it exclude? Do people who live in the Mediterranean region eat shredded wheat cereal? Soymilk? eggsbaconchipsandbeans? Blueberry muffins? Spaghetti and meatballs? Pumpkin pie? How much?

I imagine there's a lot of variability, with so many countries and cultures bordering the Mediterranean Sea, from Spain and Morocco, through France, Italy, Turkey, Israel, Egypt, and the rest of Northern Africa. Oh, and the Greek island Crete (I know Mediterranean Kiwi will say something if I don't). The benefits of the MD, if real (maybe it's the geographical location) probably depend on a combination of dietary factors, rather than any particular nutritional component.

This recent study in the British Medical Journal supports the existence of a dietary pattern, or at least it didn't refute it, "The results of our study do not refute the possibility of synergistic effects among foods and nutrients in the Mediterranean diet."

Background:(So, here is an outline of an MD - description and quantification was detailed in this and cited studies.)

"Controlling for potential confounders, higher adherence to a Mediterranean diet was associated with a statistically significant reduction in total mortality."

The contributions of the individual components of the MD to this association (reduced mortality) were:
________
In as much as foods consumed in Greece may reflect the Mediterranean diet, this investigation adds to accumulating evidence that a certain dietary pattern (i.e. high in fruits and vegetables while low in meat) rather than a certain dietary component, is responsible for longevity.

The study went further though by assigning relative importance to components of that successful dietary pattern - with the top three contributors being, in order of benefit:How you would describe the Mediterranean Diet? What foods would you say it includes? Excludes?
________
Photo of a traditional Greek salad I found on Havabite Eatery. Mediterranean Kiwi, can you vouch for its authenticity? (What are those shiny green roll-ups?)
Posted by Bix at 4:00 PM

pita like bread or flat bread ( no butter or eggs in them ) roasted on fire
dry fruits, dates ( even raw ) and figs
lots of tahini, tabbouleh, things made out of wheat bulgur
sea food from the sea nearby ?
olive oil - the bestest quality - raw - i think
grilled meat ( the quality of meat itself - all of it is kosher/halal . i am not sure both are the same, but they do have a specific way of butchering the animals) and grilled vegetables
wine.
great bean salads

My god, Anrosh. Come cook for me.

So, you would say the MD has a lot of grilled food?

Thanks, michael. Stuffed ... with rice? (I'll say this, the MD does seem to involve more cooking than a typical American diet.)

the mediterranean diet is based on a diet of beans, fruit, greens and fish, with hardly any sweets and just once-a-week meat servings.

it was defintely the main dietary pattern in the past, but there is no way any young/modern/active/educated person practices this kind of diet any more - mamas have stopped cooking like this, and it is often referred to as grandmama's cuisine, a sign that it is not as commonly eaten as it used to be

sadly, we are experiencing the negative effects of the introduction of globalised diet trends in the mediterranean and there is very little we can do to stop these trends from taking over where the mediterranean diet left off

i like to believe we are still practicing it at home, but we are defintely eating more ice cream now in the summer than it would ever have allowed...

I enjoy your perspective, Mediterranean kiwi.

So, once-a-week meat. Wow. I can't imagine that going over here. Even if people aren't grabbing a fast-food burger, they're cooking meat at home. We just had a holiday here, our Independence Day. There were brochures and inserts in the newspapers, in the mail, commercials on TV ... all promoting the purchase and consumption of meat ... hot dogs, hamburgers, steaks, grilled chicken, fried chicken, pork chops, pork tenderloin, page after page of meat. Well, I guess grocery stores won't make much money selling buy-one-get-one-free heads of cauliflower.

Meditteranean Kiwi... would you say that area has started to adapt a Western-style diet? There's a book I'm reading, which I'll review on my blog (sorry Bix, had to plug :)) and it says the Western diet is world-wide now. Countries that never had 'our' problems (health), are greatly increasing.

Bix... You're right. I can't believe how much meat is thrown at us during the holidays. It's crazy. Oh, and I noticed as you laid out in bullet-form the components of the MD, by those standards, it seems what the North American diet's new 'pyramid' is trying to convey. But we're *still* doing something wrong. We're not getting any healthier!

I've said it before and I'll say it again; I've tried the MD and loved it. I *never* felt better. Increased olive oil consumption, more veggies, less meat and NO sweets (or very, very rare). Dairy? Well, I still had it with my cereal in the morning, but that's usually it.

here's a rough menu plan that i follow in the winter:
http://organicallycooked.blogspot.com/2007/08/weekly-food-plan_28.html

in the summer, we eat a lot of vegetables which we grow ourselves.

i do try to keep a lot of the so-called bad food into my family;'s intake, and i cant say its not working, but the truth is that once my kids are able to service themselves, their mother's med diet will be history

Meditteranean Kiwiw.. has your (or your areas) consumption of refined grains (white flour, white sugar, etc) increased? I know it's killing us, but I wonder if it's having the same effect there.

Yeah, it's brought up a lot in the book (In Defense of Food, Michael Pollan).

greece is definitely eating a westernised diet now - greeks are more global than they think.

a recent study came out the other day claiming that cretan children eat more hanburger-style fast food than they eat dakos (http://organicallycooked.blogspot.com/2007/08/dackos-cretan-rusk-salad.html)

Here are the characteristcs of the traditional, healthy Mediterranean diet:

Is that specific enough?

everybody thinks that grass is greener on the other side.

bix, i am an easy cook. i grew up eating the above things ( minus tabbouleh and tahini - and of course sesame is plenty in india.

so i am no where mediterranean, if that is what you are thinking :)

i am the queen of one pot cooking -from scratch of course almost all the time ( until and unless i am hungry and the blood sugar is getting low -- i hit the bakery 2 blocks down where i get hot-hot breads. white or brown ( no exaggeration) from a bakery that is run by lebanese, palestian. i love cakes - but i have made a rule - " you make and you eat" - when that becomes the principle one eats less.

the problem i see in american grocery stores is "EVERYTHING" is READY made. No sweat. If one decide that he wants to eat a biscotti or a tabouleh, it is available in the store.

Nothing is more convenient than American grocery stores. I have a scottish friend who has an american wife. The problem is this country has almost no culture of cooking ( may be i am wrong ) and They cook for only 2 days of the week and it is NOT seasonal (this was new for me when i first came).
the other days it is take out and "ready made" from stores. so when kids grow up - they just do what they see. that has happened with some of my relatives who grew up here, even where moms cooked. and the food is really cheap. no economics at all.

of course i am one of the type who do not make an elaborate meal everyday and cooks the least, and includes a lot of variety ( that is my bad point )

actually there is a store on 41st and 9th in manhattan - run by a guy from greece. he has been here practically all his life and also has a greek restaurant on 10th avenue. while talking to him he told me that most of the food is cooked in Clay vessels. I have to agree with him, because my mom used to make fish in clay vessels and my grandparents cooked all their meals in clay vessels. the taste of the food is very different - very tasty. the first time i cooked fish in a vessel - one of those t-fal types, i could feel the difference. i was wondering what was i eating -

another friend who has married a turkish woman, told me that the food in turkey was "real food" :)
turks also eat a lot of yogurt as you know ..so there you go... i rambled .. i love food , but i have to conquer myself before the food conquers me - that is my fight! growing up things were rationed and so i had no problems! it was kept on the plate and no second servings - it was pure economics!

i love your blog, because this is one place i can talk what good food is all about, without being a chef and without designer receipes and breaking the wallet !

on another note, did u read that somewhere in australia, that they have banned bottled water --- we an become organic, sustainable, green , earth friendly if we want - nothing is impossible

"You make and you eat."
Yep. New banner.

Anrosh, the experience you bring from living in India (or Med. kiwi in Greece, or ...) is invaluable. A lesson for me. I love hearing your stories.

The point you make here (and you made before) about cooking keeps coming up. Cooking. Pollan & others said it too. We have to cook more. We have to teach our youth to cook. We have to make time to cook. We have to reestablish the value of cooking in society. Cooking - not knowing how to assemble 17 esoteric ingredients into a bit of sculpture-for-the-plate - but how to boil beans.

yum, but my favorite is stuffed cabbage leaves (not greek).

at the moment, we are eating a lot of zucchini - we grow a lot, so we eat a lot. i also freeze the dishes we eat on a daily basis, for use in the winter. these are our ready-made foods: we made them, not bought them ready

my pet hate in recipe blogs is when i see non-seasonal, non-local ingredients being used. it's just too easy these days to cook anything anytime anywhere.

7 glasses of wine is moderate?

Perhaps the wine is watered, but even so, 7 glasses for men seems a lot. There are some wonderful links you folks have provided here in the comments--thanks!