"For Many Giant Food Retailers, The Choice Between A Dead Pond And A Dead Child Is No Choice At All." 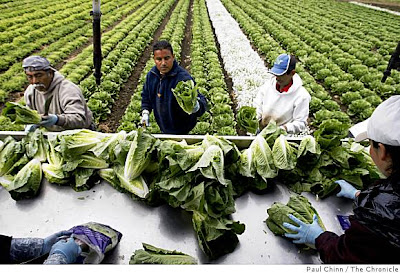 The title is a quote from an article that appeared in yesterday's San Francisco Chronicle - about practices being used on California farms in an attempt to reduce contamination from pathogens:

"It is a good opening discussion of the balance that we somehow have to forge between food safety, consumer convenience, industrialized agriculture and the environment."

Paul Roberts, in his book The End of Food, talks about how big food retailers, e.g. Wal-Mart, put pressure on suppliers (either growers directly, or manufacturers who in turn put pressure on growers) to provide a lot of product, at hard-to-meet times (out of season), for a cost that approaches a loss for the grower ... and now, to essentially sterilize their plots in the quest for safer food (and fewer lawsuits).

The grower is in a bind because they don't want to lose someone as big as Wal-Mart as a client. Even if they do, there's another big food retailer to take its place, with similar cost pressures.

So growers cut corners. They grow on every speck of land, too close to livestock farms, in densely seeded fields (requiring more chemicals). They turn over too much product, too fast, risking error and contamination.

Farmers markets are nice, but they're not where most people get their food. Money will have to come from somewhere, whether it be from consumers via the price they pay for food, the government via a shifting of subsidies and other incentives, or businesses via revenue restructuring.
________
Photo from Paul Chinn via the SFGate article above. Caption: "Farmworkers harvest romaine lettuce to be shipped directly to market at Lakeside Organic Gardens Farm in Watsonville."
Posted by Bix at 9:39 AM

Where the money comes from also raises an issue of the "cost" this way of growing exacts from the land itself and the atmosphere/climate. We truly are killing the earth.