Chronic Diseases On The Rise

Chronic diseases - diabetes, heart disease, intestinal diseases (e.g. celiac disease), skin diseases (e.g. eczema), arthritis, cancers. These are the primary causes of death and disability in the developed world. The CDC says they account for 70% of all deaths in the US. What has changed to make it so?

What someone eats is often implicated in the cause of these diseases. However, there's an area of research we should pay closer attention to - involving the immune system. Just because an illness manifests as some reaction to a particular food does not mean that food caused the illness. For example, diabetes manifests as elevated blood sugar, but it is not caused by eating sugar or starch. A common form of heart disease involves the accumulation of fat along arteries, but heart disease is not caused by eating fat. (However, once an individual has developed these conditions, what they eat can accelerate disease progression.)

The immune system's job is to protect the body from foreign substances, things like bacteria, viruses, and other proteins and molecules that could damage cells. It keeps track of what our normal cells and molecules look like, and when it can't recognize something as belonging to us, it initiates an attack. Example - Urushiol is an oil in poison ivy that elicits an immune response in humans, resulting in the classic signs of inflammation - redness, swelling, heat, pain, and loss of function. Urushiol does this by chemically changing the shape of proteins on skin cells it contacts. The immune system then fails to recognize these proteins as our own.1

We already know that exposure to cigarette smoke and environmental pollutants such as pesticides increase - substantially - the incidence and severity of many chronic diseases, including diabetes, heart disease, and many cancers. We need to pay closer attention to the role of the immune system in the development of these diseases, especially given the rise in pollution that accompanies an increasingly urbanized world.

By the way, this is one reason I feel genetically engineered foods need more study, since they introduce foreign proteins to our bodies which have been shown to elicit an immune response.
________ 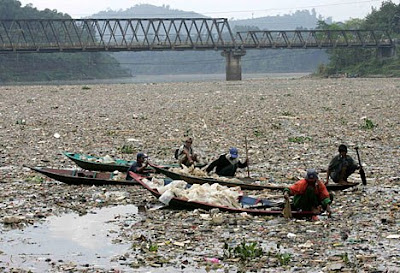 I was looking for a photo to accompany this post and saw this. It is the Citarum River near Jakarta in Indonesia, "choked by the domestic waste of nine million people and thick with the cast-off from hundreds of factories."

The water is still used for drinking and to irrigate local crops.
________
1 Interestingly, the EPA says that urushiol "will become more potent with increased concentrations of carbon dioxide and climate change."
Posted by Bix at 9:43 AM

When you say "diabetes is not caused by eating sugar or starch" do you believe it? That certainly sounds like a bit of "conventional 'wisdom' " that is screaming for some real analysis. Because certainly a diabetic has become so insulin insensitive that they can't handle carbohydrate? It stands to reason that the insensitivity was caused by eating too much carbohydrate. Surely there are some genetic factors at work here as well, but sugar/processed carbohydrate is eaten in much greater excess today, and the increase mimics the increase in diabetes. Perhaps omega-6 oil consumption (an inflammatory substance) has a similar curve, but to dismiss out of hand that diabetes is not caused by eating sugar seems too unreal to fathom.

Yes, I believe that diabetes is not caused by eating sugar.

All of that pollution is our pollution. Who is making it? Industries making products for western buyers. Corporations build factories in place like this, exploit the workers with slave wages and pollute their country since they have weak pollution laws. We then buy up the products with no thought about the consequences of our actions. What to do? Stop consuming so much. Care about where products are made and support corporations who have scruples.

Man, ElDoubleVee, that is so true. It's our pollution. And we don't want to eat food grown from there?

OK, but that webmd guy basically just said "stay thin." Easier said than done eh? What he does not state, because he does not know, is whether folks that get fat due to excess carbohydrate are more at risk than those who gain weight due to excess of another kind. Again I state that if the primary symptom of diabetes is a blunting of the insulin response, and that folks that are diabetic are overweight, and excess carbohydrate leads to overweight, we need to begin to study this connection in earnest so this guy can be made to look hilarious in 30 years.

And wow, how about that guy saying your body needs sugar because your pancreas needs to work on it. I suppose he is afraid the pancreas will get bored and start to turn cancerous? Au contraire...

I think we are on the same page but just finding our way there in a different manner .. check out the inflammation factor of sugar. If you say diabetes is a disease of inflammation, and I say it is one of sugar consumption, but the bar none most inflammatory food available is sugar, and the quanitities with which overweight individuals consume sugar, we have a theory.

Wheat is inflammatory, too - about as much as sugar -- think it's the carbohydrate aka sugar?

None of that honey either.

And here's corn. It's fun trying to find non-inflammatory high carb/high sugar foods and seeing they're all about as inflammatory as each other.

mmm, give me some wild salmon instead.

Certainly isn't the saturated fat in my steak that's the problem

inflammation and auto-immune...i have RA (rheum. arthritis), and after a series of tests (by an MD in the same office), i was told that i was allergic to soy and tomatoes (common).

modified my diet, and while it is neither a cure, nor the cause, it has made a difference in my now normal CRPhs (cardio reactive protein, highly sensitive) scores. the test is also a marker for heart disease (inflammation).

my point, what makes me "flare" won't necessarily make you flare.

via fanatic cook, i read that GM corn has managed to contaminate the soybean crop in great britain, and there was a sudden and unexplained rise in soy allergies.
here, a page of bix's thoughts: http://fanaticcook.blogspot.com/search?q=%22gm+corn%22

just listened to a broadcast about malaria and mangoes. certain malaria-carrying mosquitos have evolved that attack only at night, when many are sleeping. scientists proved this, but the locals had developed a theory that malaria was caused by mangoes. mangoes, malaria...same season...seemed logical, but proven to be incorrect.