When the temperatures climb, the animals splay.
They won't do this if someone is near, so the photos are blurry. I was tiptoeing close and zooming in: 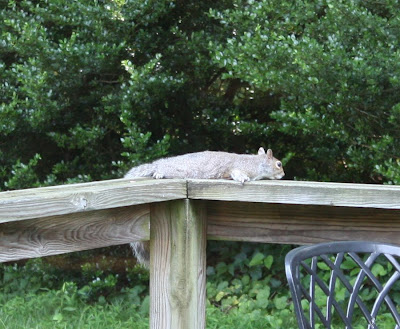 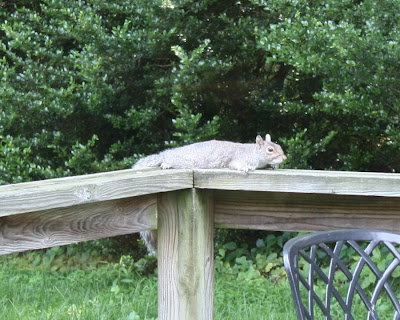 It's difficult to see from this angle, but the squirrel's entire underbelly is smashed up against the wood, his limbs bent out to the side. From above he looks like a chicken butterflied for the grill.

Likewise, this blue jay's underbelly is smashed up against the mulch, wings splayed, beak open: 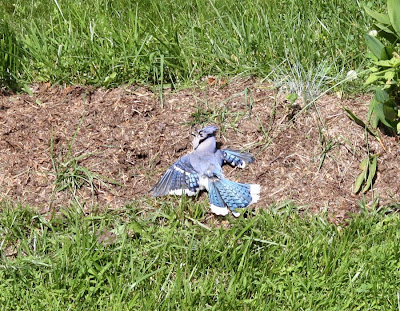 They hold these positions, keeping absolutely still, for several minutes, choosing only dry, unvegetated surfaces. I'll think I have a dead animal on my hands and as I creep close they suddenly take off!
________
Photos: Bix
Posted by Bix at 7:39 AM

Poor things, is it because they don't sweat or pant efficiently enough to cool themselves? The first time I saw a squirrel doing this (also on a deck rail) something about the posture creeped me out: what would kill a squirrel by squashing it like that?

Well! I've never seen birds do this! That's amazing--I didn't realize birds lie down at all. Have have seen squirrels, chippies, and other rodentian types do this. Also my dogs (but not cats--they tend to lie on their backs w/ their bellies up!).

The robins. Oh my god, the robins. And they blend in so well it just looks like a pile of dead leaves.

I don't know if it cools them. That's my guess, but maybe it has something to do with their lice&flea population?

My housebunnies do this -- very cute.

Do you like animals? Please help and add this link to you site: