Vegan Is As Vegan Does 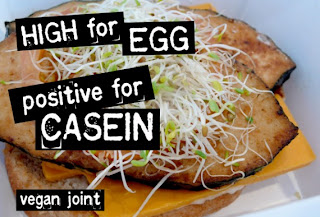 I received this link in an email from cw. (Thanks cw!) It's getting a lot of hits, so be patient if you go there:

Team Quarrygirl and Mr. Wishbone from quarrygirl.com tested food from 17 vegan restaurants in the Los Angeles area. Seven of them tested positive for non-vegan ingredients, mostly egg and dairy (the milk protein casein).

It reminds me of the Seinfeld episode where everyone was raving about a shop's fat-free frozen yogurt, to find out, whilst racking up the pounds, that it wasn't fat-free.

But for some it's not a laughing matter. Egg, milk protein, and shellfish can induce allergic reactions. I don't know the legalities of this, but if I ordered food in a restaurant that was labeled as free from these known allergens, and I experienced a reaction, I would hold the restaurant responsible. 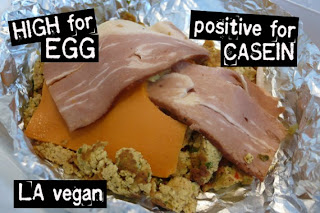 The quarrygirl team did some additional investigative work on vegan fake meats, since they're often produced offsite. They found that:

"MOST, if not all, of the fake meats you buy come from Taiwan."

"Posing as a potential US importer of allergen-free veggie meats, we emailed the Taiwanese manufacturer," [and also spoke with] somebody in the US who worked in the restaurant business in Taiwan."

"Sometimes eggs, fish flakes and milk might be added but not on the label, and we [Taiwanese manufacturer] never include ingredients of all the additives – there would be too many."

Stark difference between food regulation here and there. This highlights the need for regulation of imported food, doesn't it.

One comment was from someone claiming they worked for the manufacturer of the test kits:

"I work for the manufacturer of the tests that Quarry Girl used. We have been passing around this article in the office today and are so excited to see our products being used in this way. While I don’t officially speak for the manufacturer (and I am not anything resembling a vegan) I can tell you from the methods and pictures that this test was properly conducted and the results should be recognized.

We focus very tightly on false results: a false negative could kill somebody with an allergy while a false positive could cost a lot of money in lost production, discarded foodstuffs etc."

A spectacular job.
________
Photos from quarrygirl.com. They're of actual tested food samples.
Posted by Bix at 3:52 PM

There has always been something that didn't seem quite right about the mass produced, meat substitutes. Not consuming meat but something like it and filled with stuff you have no idea about. Just seems anti-vegan. That's just me shooting from the hip anyway.

shaun, those fake meats, I read about how they're produced. The amount of processing ... wow.