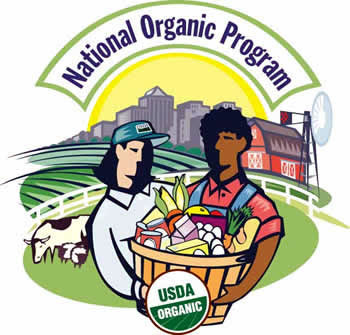 Great article by Marion Nestle in her Food Matters column for the San Francisco Chronicle over the weekend:
'Certified Organic' May Not Be 100%

She answered these questions:I liked how she dealt with the last one, "Aren't organics elitist?" Here's what she said:

"I once heard Eric Schlosser answer a similar question aimed at his book, "Fast Food Nation." He pointed out that social movements have to begin somewhere and that several began with elites but ended up helping the poor and disenfranchised - the civil rights, environmental and women's movements, for example."

She didn't deny that organics are elitist, choosing to focus instead on the impact buying organic can have, regardless of who does the buying.

Here she suggests what might be done to remove the price barriers:

"Dealing with the elitism implied by the higher cost of organics means doing something about income inequities. If we want elected representatives to care more about public health than corporate health, let's work to remove the corruption from election campaign contributions. If Congress were less beholden to corporations, we might be able to create a system that paid farmers and farm workers decently and sold organic foods at prices that everyone could afford."

I'm a big believer in voting. The reason we have members of Congress beholden to corporations is because the majority of us preferred it that way, and expressed our preference in our vote. (By the same token, the reason we did not as a nation commit to reduce greenhouse gases at the turn of the century is because we knowingly voted for elected officials who did not support the Kyoto Protocol.)
________
Posted by Bix at 9:25 AM

i am surprised to hear that the british botanist learnt from the indian farmer ! my indian grandfather was a farmer and he cultivated rice, sugarcane, the indian way ( in american language organic ) and kept a homestead - but he always envied the rich farmers who could add pesticides to crops and yield higher results !

years roll by now the urbanised daugters garden vegetables to relax from their hectic professional life ..

and the granddaughter struggles even for the basil to grow !

it is amazing to unravel the reasons why a person pursues vegetable gardening/ or do agriculture.

you may be surprised that india is going the american way -- it seems there is a hep store called ' reliance fresh ' but the walmart of good looking vegetables throwing out the farm to shop markets ...india is definitely foll0wing the american way now !
farmers in india are committing suicide ..
and most of these are organic farmers who are poor and cannot afford the expensive chemical fertilisers etc etc and corporate farming is becoing a rage ---i have been hearing and reading this.
as for my family we have stopped farming because we cannot earn a livelihood ! doing farming -- there is a book called organic ( cannot remember the name ) .... but the point is organic food is not elitist. it is expensive because the produce is slow and low and it is basically economics.. but with mass production obesity is the answer !

there is no easy answer -- but if one does not waste food and teach children what is food -- organics is the answer. -- my grandfather use to have pity on us city growing kids who did not learn to understand seasons ..better late than never -- may be a grandfathers fervent wish really does come true ...and i am learning .

in the union square market ..i once spoke to a farmer who was selling organic meat - he could not write certified saying that being certified is expensive .. in any case i am skeptical about the agriculture department and the politics that swirl in the FDA! ..why not ...and i will trust the farmers more

and when it comes to organic meat ( which is extrmemly difficult to come by )we cannot have meat on the table even twice a day and if we want to eat meat twice a day we have to non-organic meat.

exactly that is the reason for processed goods. In order not to waste raw produce they started processing food -- common sense logic tells this..doesn't it ?

i am definitely not a purist - but if one tries to make everything from scratch ...we eat less ( i cannot speak for anybody else ) what is the percentage of such people - 0.000001. even parents when trying to balance between a job , kids and home go for this easy go and the result of hyper kids is because of the artificial flavored chemicallly induced snacks and packaged foods from the shelf! and then you complain to the doctor that the kid suffers from distraction is hyperactive ... and now the doctors gives him medicenes --- boy that is a merry go round , but can you see the food chain of economics here ?!

and the answer to organic food - eat seasonally.
turn your yard ( front and back ) oh ya.. one waste water to grow the grass and then mows it and waters for the grass to go back again ! ) into a vegetable garden. worried about your block will look.
at first the "all show people " will whine and when they see the juicy tomatoes their eyes grow red and green with envy and will do exactly do what you do. and if they are still not convinced -- you can send them a batch of tomatoes that are now crowding your yard -- and a fresh caprese salad will definitely change their mind !

Interesting post(s), Anrosh. You make very good points. I'm sorry to hear things are so dire for the farmers in India :(

Does anyone know if the U.S has 'certified organic' criteria? We don't in Canada yet, and they keep claiming it's coming, but it keeps getting put off, and put off...

I'm not sure I agree that we (at least as particular individuals) knowingly vote for representatives who are in the pockets of lobbyists. Our representatives do not announce such things during their campaigns, and while older candidates may have a track record of "lobbyism," many of the younger folks don't have a record of accepting lobbyist donations, at least not a record we can find out about.
And when I voted for Bill Clinton and Al Gore, it was specifically b/c Al Gore, who was from Tennessee where I lived at the time, was an avid environmentalist. No one could have known that Clinton would undermine Gore's environmental aspirations with his own less environmentally friendly approach. I remember wishing at the time, though, that Gore was the Pres. candidate and Clinton the VP.

Interesting take, Anrosh... That organics were once the rule, now the exception (here, and now India). And as an exception, the supply is low, and so the value high.

I just loved everything you wrote, especially the paragraph with this: "what is the percentage of such people - 0.000001." You summed it up so well. The "merry-go-round."

I question whether I should write these posts about organics, because I don't eat organic all the time, and it depresses me what I'm eating, and the businesses and practices I support. As Mark Bittman would say, "What are you going to do?" On the other hand, I wish it to be different, and talking about it, keeping the social conversation going, can have an impact (I hope).

Where corruption may be less visible, there are some basic policies that are quite clear when people vote.

Bush said flat out that he wasn't going to sign Kyoto in 2001. A majority of Americans supported that stand by reelecting him in 2004. (Clinton did sign Kyoto in 1997, but the Senate didn't uphold it.)

bix -- i am sure there are many readers reading this, but not commenting. so unraveling 'organics ' on your blog is much needed.