Update: I just saw this graphic: 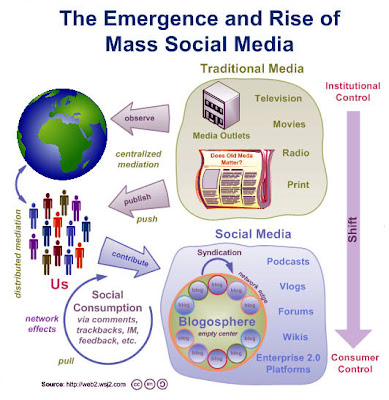 Click to enlarge.
Newspapers are struggling, aren't they. When I grew up, it was all about newspapers, and a little radio. Television didn't come into play until I was a teenager. Even then, there was just one "Nightly News" broadcast, and if you didn't catch it for the few minutes it aired at 6:00 p.m., you were in the dark until the next day.

Newspapers, on the other hand, published several editions a day. Our Philadelphia Bulletin ran a morning and evening edition, at least that. Editions printed later in the day (and so with fresher news) were designated by more stars. (I think I recall papers with 4 stars, but my memory is fuzzy.) Newspaper carriers would walk the beaches in South Jersey during the summer, with huge canvas sacks slung over their shoulders, calling over and over, "Philadelphia Evening Bulletin, Bulletin here!"

Ah yes, but change is good. (this from a former small town news stringer)

My most clear early TV recall is JFK's funeral. (I was 4)

thanks for the whitehouse flicker news -- until the cell phone revolution some villages in india had only public phone and only the most well of person would have a phone in their house. Our first landline in my house in the suburbs of bombay was installed in 1995 - and i had access to the internet 6 months after that in a university near by - those days only universities were connected. and the internet was like a bibliography -- but i was already addicted by then.

we used chat too - but we used to a command using "telnet " -- sounds very ancient -- i hope there is a musueum somwhere showing the computer from the 60's to now -- and the changes.

The evolution of the blog is one of the biggest tools which will make the government hear strong voices. The voice is strong and one can connect with many communities depending on interests -- and connect with people too -- on this aspect i agree with the virtual flatening of the globe - it was amazing to see the dynamics during the election and how the candidates were scared how the bloggers would react .. now that is democracy -- other wise sometime i feel democracy is "demockracy" ( not my word - another blogger krishna aradhi coined it )

i have mixed opinions about twitter -- that means i have 100's of emails to read? what's your opinion - i have kept away from all social networking sites ( identity theft is the main reason and the prowlers are MONSTROUS) except one only for professional reasons.

As a consumer I don't like the duplicate prices that I am paying for dupliction of resources. infact the prices of phone minutes is more expensive than what we used to pay before !

Anrosh, thanks for telling your story. Makes me feel less alone out there with my story.

I remember telnet. I was using the computer a little for research before the World Wide Web came online in 1992. You could dial (modem) in to a few Universities in those days using telnet (one I remember using was Penn State's PENPages), but it was hard to decipher. All words, a bibliography like you said, nothing at all like the web pages of today. And you had to use commands, there was no "menu," not until later. There was also email before there was WWW, but few people were using it.

I only signed up for Twitter a few months ago. I see the appeal - it's very fast and up-to-the-minute. But since you can only enter a message of 140 characters in length, there isn't much substance to what people say, unless they provide a link to a webpage.

I signed up for Facebook just a few weeks ago. The big difference I see between the two, Twitter is public, anyone can read what you write. Facebook is private, you designate your "Friends", and only they see what you write. However Facebook has more space to say more things, with photos/videos. So far, I prefer my blog to them both, but I've learned a whole lot by following what people say on them.

yes those days the telecommunications department was government controlled and corruption was rampant ( i do not know how it is now ) until the evolution of the cell phone about 10 years ago and everyone has a cell phone now - that is what i hear.

as for the browser it was called lynx -- PENP pages should have been intranet then --because i am sure i couldn't accesss it -- and how can we forget -everything was content based and not in search mode ( thanx to the algorithm genius -- all is possible ) what is not possible is that we have not tried it yet !