When Social Distancing Is Good

"In each of the four major pandemics since 1889, a spring wave of relatively mild illness was followed by a second wave, a few months later, of a much more virulent disease. This was true in 1889, 1957, 1968 and in the catastrophic flu outbreak of 1918."
- CNN: Scientists Dig For Lessons From Past Pandemics, April 30, 2009 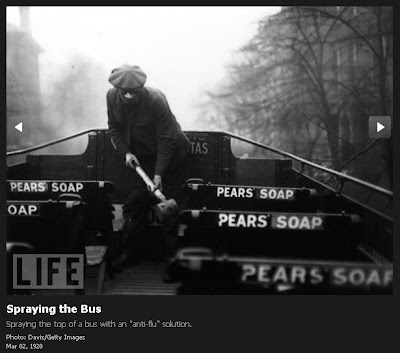 Right now we have a novel virus, one to which humans have never been exposed and have little immunity against. We have a virus that can transmit from person-to-person, unlike the H5N1 bird flu virus which is still predominately bird-to-person. And we have a virus that has done what we'd hoped we could prevent - gone everywhere: "It's too late to contain it."1

It appears to be waning. Might it return? Is there something we can do?

"[The CDC] examined 43 cities and found that so-called nonpharmaceutical interventions -- steps such as isolating patients and school closings -- were remarkably successful in tamping down the outbreak."

They sure were successful in Gunnison, CO:

"In the mining town of Gunnison, Colorado, in 1918, town leaders built a veritable barricade, closing down the railroad station and blocking all roads into town. Four thousand townspeople lived on stockpiled supplies and food from hunting or fishing. For 3½ months, while influenza raged in nearly every city in America, Gunnison saw not a single case of flu -- not until the spring, when roads were reopened and a handful of residents fell sick."

Now that's isolation. If these interventions work, then we should, as flu-expert Laurie Garrett said in her PBS NewsHour interview from May 1, be enormously grateful for the sacrifices Mexico has made, and is making, on behalf of the rest of the world. The hit they're taking economically, socially, politically, for closing schools, and other social and political venues is enormous. One of my professors used to say, "When public health strategies are successful, nothing happens." That nothing is happening to many of us may be due in part to Mexico's brave actions.
________
1 I just heard David Gregory on Meet The Press say "Our strategy is containment." How could he say that? Where has he been? Hasn't he heard the terrible phrase that every official office has reluctantly repeated the last week? ("It's too late to contain it.") I miss Tim Russert. Anyway, one of his guests on the program, the acting head of the CDC, Richard Besser, corrected him right away.

good point about mexico, despite the economic difficulties they may endure because of this

I hadn't thought about Mexico's unique role until she said it.

The other thing ... people have been complaining?, maybe concerned is a better word, about hospital emergency rooms filling. What if this flu was more virulent, as we expect H5N1 bird flu to be? After all these years of planning for a bird flu, why aren't hospitals prepared? Raising the pandemic level is supposed to free up resources for just that.