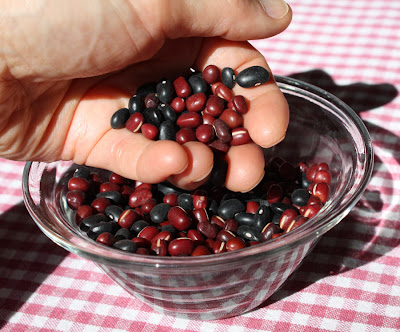 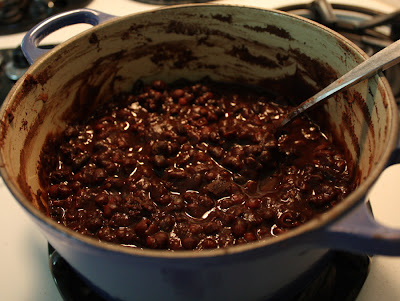 I had some adzuki beans not that long ago. For some reason I remember them tasting slightly sweet? I bet that was a good combo.

Alright, I'll bite (no pun intended). Why do you like playing with dried beans? (Asking as someone who doesn't do much with beans at all).

I don't know. Maybe it's the sound they make when they rub together.

They do have a very nice sheen and a silkiness when you run your fingers through them.

Dried beans I can understand. Soft, in a hard sort 'o way. But.. cooked?

neither of these beans are available in greece
even if they were, i have no idea what to do with them - i need recipes...

I boil them. Nothing special. Since changing my diet (and my methods - going for simplicity), many of these foods are still new to me.

I rinse the dried beans in water, remove stones, put them in a pot with lots of water, simmer, half-covered, for, oh, 4 or 5 hours, "until they're done." I add water to always keep the beans immersed, until the end when (as you can see) I boil away most of it.

I've found the longer you cook these beans, the easier they are to digest. Sprouting improves digestion too, but I usually don't take the time (or plan ahead that much). I've been told a pressure cooker works well, cuts the time.

The black beans are starchier than the adzuki beans. The black get very soft and color/thicken the sauce. The adzuki hold their shape or texture a tiny bit more. I'm not concerned about seeing an intact bean shape, I like these this way.

When done, you really have to season them. At least salt. Peppers/chilies go well. Sautéed onions/garlic. Here's where all the great cooks take off - yourself included!

shaun, adzuki sweet? Hm, by themselves I wouldn't say so, but maybe they're sweeter than a lentil.

Jody, A couple reasons why I've been preoccupied with beans:

And I really get into the sensory aspects of food, probably too much. Love smelling. Love getting my hands dirty. ElDoubleVee seems to be similarly afflicted.

I don't know if I can do beans, lentils. Chickpeas, yes. I can see the health benefits. I just don't know if it's enough to get me to change to beans. I might be slow on that one.

The sensory aspects of food is definitely enjoyable. I don't do it enough sometimes, I think.

thanks very much for the instructions
i did manage to find some black beans like the ones in your photo, and i am going to try out some kind of dip like yours. these beans are very different to the way greeks eat beans

soaking the beans cuts a significant amount of cooking time - like a goood 2-3 hours.
i use pressure cooker -it lessens another half hour --again it depends on the amount of beans used.

Adding tomatoes with garlic, sauted onions,corainder powder, paparika is optional, turmeric and salt adds flavor.
most vegetarians in india use this as a source of protein.

generally eaten with rice. but i eat it with rotis (flat bread ), with millet, barley. used in soups with amarnath -- many possibilities exist

I can see how one would make them.. tasty... but I think it's the cooked consistency that would bother me.

Re the sweetness of adzuki beans, in Japan they're used to make a type of candy! I made it once long ago, and it was kind of good. There is an essential sweetness there that helps it along. Here's a link to some adzuki recipe desserts:

I'm glad I love beans!!! And your posts on them have been great, Bix.