It's Not That Meat Is Inherently Bad, It's That We're Making It So 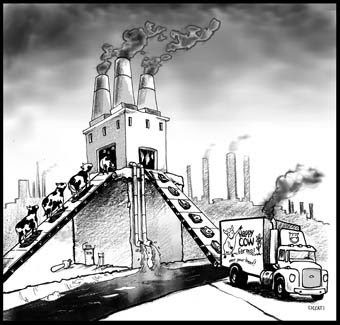 One of my commenters asked me where I stand on meat. That's a moving target, but ...

Humans are omnivores. We have the ability, structurally and chemically, to digest a variety of foods - plant and animal. We derive nutrients from both. That multi-functioning has helped us to survive millions of years of migration, treacherous weather, different environments. You have to love how industrious we are.

I think meat plays a role in a healthful diet. I don't think that role is big. And I think it varies from person to person.

Strict vegan diets provide some nutrients in such low amounts that it's best to supplement. Vitamin B12 and zinc come to mind. I have reservations about a diet that requires supplementation to be adequate. Why not get your nutrients from food?

I think we're entering a time when the arguments over whether saturated fat (or protein or iron) in meat is good-or-bad will give way to the arguments about how much meat can be sustainably produced at all (and so, how much there will be to eat).

P.S. - The way we produce meat these days, resulting in cuts with more omega-6 fatty acids (not good), more organic pollutants, antibiotics, hormones, maybe E. coli, maybe prions (we don't test for mad cow), pushes me towards the lower consumption end too. And anyone who thinks large confined feeding operations breed happy cows doesn't give a whit about animal welfare. It's not that meat is inherently unhealthful, it's that we're making it so.
________
Cartoon by Ben Ciccati, from the Santa Barbara Independant's article, Industrial Meat Production Threatens Human and Environmental Health
Posted by Bix at 6:46 AM

What a completely balanced way to look at the issue of meat consumption. Yeah for you!

I believe that humans can be healthy on a diet that does not include meat, but does include raw A2 dairy and eggs along with properly prepared grains, nuts, and legumes (to minimize anti-nutrients). Substituting shellfish for raw dairy should also provide a healthy diet without including meat from larger animals.

That said, I like meat, but don't usually eat more than one serving a day. However, I prefer meat that is from pastured animals that have been fed their natural diet, which is not always easy to find nowadays. My diet includes large amounts of raw dairy and eggs.

I like the cartoon. Those cows oddly look like Holstein dairy cows going into the meat factory, which is not our typical source of beef. However, from a health standpoint, it might be a good idea to get rid of our Holstein dairy cows and replace them with heritage breeds. Why? The Devil in the Milk. Holsteins have milk that has a much higher percentage of casein protein as A1 casein than heritage breeds. Evidence is accumulating that A1 casein may cause or contribute to a variety of health problems. Human milk and goat milk is all A2 casein and heritage breeds have about 90% or more A2 casein in their milk. Holsteins typically have about 50-70% of milk casein as A1.

Our food culture in America is wrapped around meat - changing the way we eat requires major cultural changes. Of course the fast food industry managed to do that is a few decades, so it's not impossible.

This is where going global can help - most other nations, particularly in the developing world, have food cultures that relegate meat to its proper place in the diet.

The principles seem pretty simple, in theory, to me.

Eat as close to the ground as possible. Be moderate.

Does that pretty much sum it up?

What an excellent essay, Bix!

Ohhh, I forgot completely about the genetically engineered grains they feed them.
Man, I'm glad I wasn't born a cow.

Thanks, Bix. I'm a vegetarian, not a vegan, for the reason you pointed out: I prefer to get my nutrients from food and not supplements. I'm not 100% at peace with that (for personal reasons), but I realize it's where I am for the moment and that's okay.

I also agree with you that the importance of meat (or, to frame it differently, the consequences of a vegetarian diet) differ from person to person. A vegetarian friend of mine, always very slight of frame, absolutely could not maintain her body mass or energy once she started work as a massage therapist, so she began eating meat. I trust she knows more about how her body works than anyone else does, and I think she made a good choice for herself. I just want those people who work best with some meat in their diet to have easy, affordable access to healthy meat. Same for dairy and eggs. Like you said, though, that's tough between the E. coli, antibiotics, hormones, crowded living conditions, mass slaughtering, cloning, irradiation, what have you.

It's scary out there.

I believe that this blog was in response to my earlier question about your stance on meat. Very well said and I could not agree more.

I find it very interesting the same plant-based diet that is best for human nutrition is also best for the environment.

while I am still researching the evidence on this topic and have yet to decide to be vegan or vegetarian or a meat-eater, i do want to point out one thing in relation to what you said about human's having the physiological capacity to digest meat and veggies alike...yes, but maybe it is because thousands of years ago we started eating meat out of survival and not thrival. just something to think about. but i do love how you addressed this topic. very clear & concise.