I'm in a quandry, so I thought I'd ask what you do. Here's another excerpt from Paul Robert's book, The End of Food:

"Fish farms are floating CAFOs*: A large-scale operation generates as much nitrogen-rich fecal matter as a human town of sixty-five thousand, creating enormous water-quality problems in the bays and inlets where these facilities are built."

One might argue that aquaculture is a more sustainable means of supplying seafood than is the dragging of 15-ton nets through vast swathes of open sea. 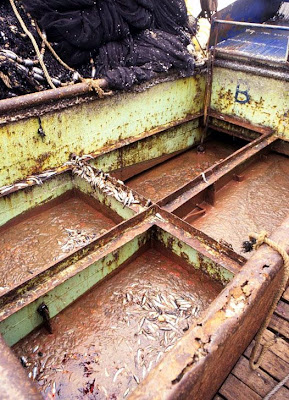 "Carnivorous species like salmon and halibut are fed on fishmeal made from herring and other smaller species harvested by the same industrial methods that depleted other fisheries: nearly a sixth of the entire commercial catch is fed to farmed fish."

That consumption of smaller fish to support fish farms is called an externality: a cost to society that's not included in the price of the good.

I've been learning about externalities. In the livestock industry, some externalities are water pollution and greenhouse gases. The costs associated with those (clean-up, management) aren't included in the price of bacon or ground beef at the store.

I'm not sure what to do. Should I look for fish that didn't come from a farm? Or are farmed fish the better choice, considering how wild catches are depleting oceans and devastating ecosystems?

I can see one thing - those days of 99-cent all-you-can-eat fish fries are long gone.

* Concentrated Animal Feeding Operations (CAFOs), also known as "factory farms."
________
The photo, from FishingHurts.com, is not one of farmed fish, but of small fish being gathered to be made into fish food. The caption read:

"The largest ships in the ocean often search exclusively for small "trash fish" who were once considered inedible but are now being slaughtered by the billions, ground up, and turned into food pellets for farmed fish. Hundreds of tons of fish are caught with each sweep of the ships' massive nets; they're dragged aboard and dumped into rotting cesspools such as the one shown, where they will suffocate and die before they are taken to a fish-pellet processing plant."

oh, great. that picture is going a long way to pushing me back to strict vegetarianism from my "yeah, sure, i'll eat fish too" position.

Small wild-caught fish and shellfish from clean waters are ideal for health but hard to find these days. The larger fish often have a lot of accumulated methyl mercury (although supposedly, associated selenium makes it less toxic).

Our increasing population is putting pressure on many ecosystems and fueling the increase in industrial farming and livestock raising and associated increase in pollution and unhealthy food. The root of the problem is our rapidly increasing population, which in many areas is already past sustainable limits. Another reason why wise family planning is critical throughout the world today.

I agree with both Seinberg and Bryan. But people (some people) get SOOO pissed off when the subject of family planning is brought up--pissed either on religious grounds or libertarian grounds.

And from what I've read, farmed fish are filled with toxins. I can't cite chapter and verse on that, but I've read a number of articles about it in relation to my newsletter research.

If the oceans die, we all die. How badly do we want to eat fish?

Does anyone eat tuna fish or salmon?

Regarding the population. I'm not pissed off or anything (not about this) but I think the factor of distribution (money/politics being at the heart of that) strongly influences how food is currently being produced, or in this case fished.

It's not that the world doesn't have the resources to provide enough good clean food to all its population at the moment, it's more a problem of poor distribution of those resources.

(That's not to say I don't think feeding an even larger world population won't be a challenge.)

That photo makes me wonder where all the fish oil for supplements is coming from.

years ago, my rheumatologist cited a study suggesting that high doses of flax seed or fish oil would help suppress inflammation. he also stated that he preferred flax seed oil over fish oil capsules specifically because of mercury contamination.

I am currently on fish oil pills as a "natural" inflammation, but a natural healer detected low-levels of mercury just after a month on the pills. The bottle says it is tested for mercury, so I'm not sure which is true.

Mercury compounds are more water soluble than fat soluble. So you're more apt to find them in the flesh of fish than in the fat or oil of fish. Fish oil is more prone to contain fat-soluble PCB's and other pesticides and organic pollutants than it is mercury.

The greatest source of mercury in most humans' diets is fish flesh.

I haven't gone vegan yet. But I am disgusted by CAFOs for fish, beef and pork. I cut back on the amount of beef and fish I eat. This article in the NYT, which includes comments from Mark Bittman, has an interesting perspective.
http://greeninc.blogs.nytimes.com/2009/04/13/the-challenges-of-sustainable-seafood/

Also, to find responsibly raised meat and eggs in your area check out Eat Wild at http://www.eatwild.com/index.html

You also can sometimes find fish oil caps made from small fish like sardines, though whether they're farmed or not, I don't know. The occasional times I eat fish, it's sardines, kippers, or anchovies (it's a salt thing).

Re family planning, it seems the people who are most outraged by it are those who have or plan to have LARGE families (like "18 and Counting," or "Jon and Kate plus 8," or "Table for 12". Or the Octomom).

To your question: yes I eat both salmon and tuna. Wild salmon, canned tuna; each about twice a month.

And I have no children, a choice I made partly because I'm about as maternal as a haystack and partly as courtesy to our host planet.

Oh RB, that was a great link, the NYTs with Bittman & sustainable seafood. I love reading the comments. Learn a lot.

They mentioned this Monterey Bay Aquarium card you can carry in your wallet:

I eat canned light tuna, although a lot less than I used to. I like salmon and will buy wild Alaskan, but it hasn't been in stores for months. They tell me there's a season for it, starts in May I think. I'll eat canned salmon but, well, I guess I'm just losing my taste for it. It's overly salty and slimy. Same with canned sardines of late. I know, I'm a food snob.

Flax seed oil goes rancid very quickly, yes. Anything with omega-3 fats in it will go rancid quickly because omega-3s are a polyunsaturated fat, and the more unsaturated the fat, the faster it oxidizes or goes rancid. Keep cold.

I believe that seafood from Maine is generally less toxic than other places. There's a type of small shrimp native to the Maine area that you can order by mail. I've considered doing that, as I had some the last time I was in Maine and they were quite tasty (and nice to know they aren't doused in toxins to keep them fresh and unstinky as they come over by slow boat from the far east [as per one of your posts a while back, Bix]). If you want particulars on Maine shrimp, I'll research it. They are seasonal.