What Are We Adapted To Eat? 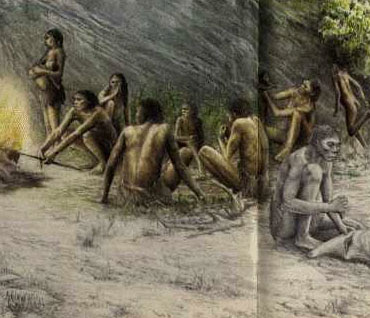 Dr. Richard Wrangham, from Harvard University, says we're adapted to eat food that has been cooked. And, well, I'll let you work your way down to that last sentence.

Here are a few excerpts from The Economist's review of Dr. Wrangham's presentation at the annual meeting of the AAAS (American Association for the Advancement of Science) two weeks ago:1

"Without cooking, the human brain (which consumes 20-25% of the body's energy) could not keep running."

"In fact, [Dr. Wrangham] thinks that cooking and other forms of preparing food are humanity's 'killer app': the evolutionary change that underpins all of the other -- and subsequent -- changes that have made people such unusual animals."

Some hypothesize that increased meat-eating was the dietary change that led to the emergence 1.8 million years ago of a species called Home erectus, which:

"... had a skeleton much like modern man's -- a big, brain-filled skull and a narrow pelvis and ribcage, which imply a smaller abdomen and thus a small gut."

"When you do the sums, he argues, raw meat is still insufficient to bridge the gap. ... Pre-agricultural man confined to raw food would have starved."

The Lower Cost of Digestion

"Cooking increases the share of food digested in the stomach and small intestine, where it can be absorbed, from 50% to 95%."

"Experimenters ground up food pellets and then recompacted them to make them softer. Rats fed on the softer pellets weighed 30% more after 26 weeks than those fed the same weight of standard pellets."

The "Killer App" That Grew Our Brains Now Threatens Our Health

"Dr. Wrangham suspects the main cause of the modern epidemic of obesity is not overeating, but the rise of processed foods."

Of course I love stuff about prehistory, but this is a really interesting essay! Hopefully cooking fresh food from scratch is healthier than convenience food (otherwise all my slaving in the kitchen is for naught)! Thanks for bringing this to our attention, Bix.

I don't know if humans (Homo erectus?) controlled fire 1.8 million years ago, but I can see an argument for it here.

When I was researching the Inuit diet, there were some claims from raw foodists that the Inuit ate completely "raw" food. The truth is quite the opposite. While they ate some raw seal meat, they cooked the blood and scraps and made a soup, which nutritionists agree was the reason they were healthy. Without cooking they could not have survived, but interestingly without eating raw meat, they would not have received enough vitamin C.

There's vitamin C in raw meat? I learn so much when I come to this blog! :) So for like a week last summer I tried the "no cooking" diet and I basically ate like sandwiches and chips, but then I realized that my lunch meat was cooked, my bread was cooked....the mustard was cooked etc. um, I'm embarrassed to say I was on my 3rd day before that realization hit me. LOL I guess, I was thinking if *I* didn't cook it or go to a restaurant or fast food...then that meant it was an uncooked food. Seriously, I'm not always that dense! lol
;) peace

The thought of eating a warm cow fresh from the kill ... shiver.

Well, the Inuit ate raw seal meat and the vitamin C is there when uncooked. Even less appetizing is most of the vitamin C came from the seal's innards. Yet some historians suggest they ate whale skin to get their vitamin C intake. http://irreatable.blogspot.com/2009/01/how-inuit-get-by.html

Bix- I don't think they ate any cow meat, luckily. In fact there is no need to picture that image. Most Asian cultures still refrain from beef and even the Romans rarely ate beef. I'd like to research it further, but I assume we created this recent history of eating cow. Before the 1900s, cows were much smaller and dairy cows only produced a gallon of milk a day- you know for her calfs like nature intended.

Matt said:
"... you know for her calfs like nature intended."

I grew up believing cow's milk was "wholesome" (whatever that means). Now, well, it doesn't make sense. It's unnatural, as you said. What my brain says is more natural is for a human to be drinking human milk. However, I see nothing appetizing in cheese made from human breast milk. Another indoctrination I guess.

"Eating Cow" is a great name for a rap group.

Haha. "Eating Cow" could also be a name for a support group.

I don't think we're intended to eat human milk after a certain age, just like calves stop drinking milk and begin to eat grass at a certain age(or well they would if we would let them). I think it makes sense that we drink cows milk because dairy cows continue to produce milk even after the calves grow out of the "bottle" stages, but cheese tends to have lower levels of lactose which is difficult for adults to digest.

Am I being dense? Matt said "dairy cows continue to produce milk..." but isn't that because although the calves are weaned from the cows, humans continue to milk the cows and keep the milk production going?