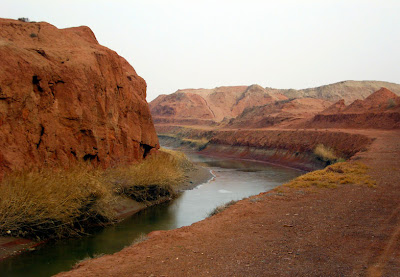 Paul Robert's book, The End of Food, has been a real eye opener for me. I'm reading a part right now that discusses problems with water, not having enough of it:

"... this emerging scarcity poses a constraint on food supplies that in some ways is more final than that of oil or climate."

He gave an example of China:

"According to the World Bank, even if China adopts a rigorous water-management system -- with higher price incentives, better system efficiency, recycling of waste water, and massive water transfers (as much as 270 million tons a year) from the wetter southern part of the country to the drier north -- the 3-H region will still face a water deficit of about 600 million tons (11 trillion gallons) or about two-thirds of the total yearly flow of the Huang River. And China is only one of a growing number of countries that will soon be slipping into severe water deficits."

How does the "local" argument work when you don't have enough water to grow crops? Local food systems are, by definition, self-contained - they do not use imported seed, fertilizers, water, or fuel. The local movement is, to use Ronald's word, an "insular" movement, one that can only take off where resources are concentrated; one that makes no sense in many regions of the world.
________
Photo of an irrigation canal off China's Huang River from Walking the Wall.
Posted by Bix at 7:57 AM

you seem to read my mind ! i have just started on the book - bottlemania. having gone through water problems all my life firsthand, this crisis is far worse than having polluted food!

new mexico (which i consider to be my home state) has always had water management and resource issues. summer 1971, brown water ran from the santa fe water taps.

"the milagro beanfield wars" is a book/movie, based on real events.

I'm not sure that the "local" argument can be knocked down because of water issues. It is true that a scarcity of fresh water is our most pressing problem and "first" world countries tend to have the most fresh water. On a side note, I feel like I'm in the book Dune and we're on Arrakis when we talk about water shortages.

Each region has its own challenges with resources. Some deal with water shortages, others with great storms.

In Israel, where water is scarce (even if they do take some water from Palestine) it is essential that farmers conserve water. In a local permaculture system, there are many plants that require little water and provide sustenance. Black eyed peas, Jerusalum artichokes, asparagus, cacti, amaranth, chickpeas, and tepary beans are all drought resistant. If we want to take the local thing to heart, then different regions should eat different foods based on their conditions.

The "local" movement is an insular movement because each region should adapt to various climates. Really, if we wanted to solve the water problem, each region should grow what is native to their area as native plants do not require irrigation. This would place less of a burden on places that distribute their water.

I like Matt's point about permaculture built on foods suited to regions--even micro-regions--as well as to plenitude or scarcity of water from season to season. Years ago Rodale Institute and Mother Earth News recommended amaranth as THE drought-proof crop, suitable for drought regions in Africa as well as places like Rodale's New Farm in PA! It provides complete protein (or close to it) in its grain, and really healthy greens as the plant grows. We have it at the farm. The other plants Matt mentions are equally hardy and suitable for very dry climates.

But our weather in this region this winter has been so hit or miss that gardening (or farming) w/ local conditions in mind seems the only answer at the moment. Here in Delaware County, we're in a forest-fire warning b/c we're more than 6" under the expected precip amounts. But a couple counties over (or up) they've had plenty of precip and lots of water in the reservoirs. So flexibility among growers as well as among consumers is probably a useful idea.

Matt, I liked your point about different regions eating different foods based on their conditions.

In fact, I think future food production will have to incorporate more aspects of the local ideology than it already does, e.g. your description of drought-resistant crops.

But I also think it (future food production) will involve more shared resources too. This is a great topic to go off on. Maybe I'll post more later.

When Hurricane Katrina devastated New Orleans, I recall tuning in and seeing truckloads of bottled water being distributed. This would have been a great alternative.

In response to Dr. Mel's comment on local water issues, it looks like we will have some major issues as more water becomes polluted and climate changes affects water levels. I wonder if we will have to sacrifice to the point of not being able to rely on a water supply.

Bix- There are some farm communities that share equipment up here, but it will be interesting to see if states and countries will begin to share water. I know we rely on some fresh water and hydropower from Quebec. This would be an interested topic for a post.

Just found a BBC article linking several of these issues, including overpopulation, water shortages, and--for better or worse--the need for genetically modified food crops. The article was based on an interview w/ Dr. Nina Federoff:
http://news.bbc.co.uk/2/hi/science/nature/7974995.stm
Likewise, there was a story on NPR yesterday suggesting that use of genetically modified crops might allow more farmers to grow food organically (eg, w/o pesticides), even though organic law currently prohibits gmo in crops (doesn't it?). Though I don't like the idea of gmo food, it seems like there's a groundswell of opinion in favor of it (unfortunately).

Melinda, That's the discussion we have to have. It's a hard discussion - I don't like genetic engineering. But we have to talk about food production, and (in my mind, more imporantly) food distribution. Realistically.