How Will We Produce Our Food Tomorrow? 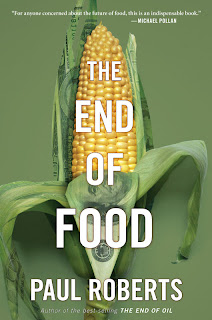 I've been reading Paul Robert's recent book, The End of Food. It's a relief to find someone writing about food production who is not just intelligent and informed, but balanced.1

One answer for how our food will be produced in the future is reflected in the agribusiness model - a model that promotes intensive, industrial ranching and farming, i.e. the status quo, at least in the US.

Another answer is reflected in the organic, sustainable, eat-local model - a model that's attractive on the micro scale, but one I've begun to see as idealistic and unattainable, raising more questions than it answers.2

Roberts presents these sides and lays groundwork for a system that uses the best from both, a system that remains efficient and profitable but still sustainable.

Here's a taste of his writing. It's an article he wrote for Mother Jones a few weeks ago. (It's provoking some passionate comments.)

Spoiled: Organic And Local Is So 2008
________
1 If I have any criticism, it's Roberts' decision not to address the biotech controversies, even if it was to say that the issues surrounding GMOs were beyond the scope of his book. I just reached Part III. He addresses it.

2 For an organic model to serve as the foundation for future food production, it must be, by definition, sustainable. Roberts: "truly sustainable food must be not just ecologically benign, but also nutritious, produced without injustice, and affordable."

I'm currently reading this book... it's amazing, isn't it?

I started to write a comment about a part I'm reading now, about water, but it got long so I posted it instead.

I recently came accross your blog and have been reading along. I thought I would leave my first comment. I don't know what to say except that I have enjoyed reading. Nice blog. I will keep visiting this blog very often.

Thank you Tessa, or is it Ruth, or is is Point Marketing, or ? Nice sentiment.