Fruits And Vegetables: The Dirty Dozen 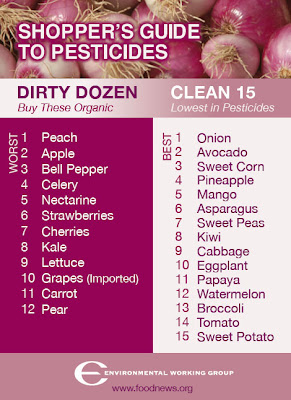 They tested and ranked 47 fruits and vegetables.1 You can see their full list here. ("Nearly all the studies used to create the list test produce after it has been rinsed or peeled.")

I'm hoping the benefits to people of eating apples, peppers, and greens outweigh the costs of using so many chemicals to produce them. What's the alternative? The best we can hope for is that the world (over 60% of our produce is imported) chooses to wean itself from them - the pesticides, not the apples.

Speaking of weaning, Paul Roberts, in his book The End of Food, says:

"Breaking this expensive and ultimately unsustainable cycle of chemical dependence is, at this late date, extraordinarily difficult.

Just as the industrialization of meat production made antibiotics a virtual necessity, our commercial crops and farming methods have reached a point where we are essentially unable to farm without massive and continuous chemical interventions.

Giving up organophosphates* for example, would cut wheat farmers' revenues by 10% and cost the California produce industry half a billion dollars a year."

* Roberts describes organophosphates as "complex molecules" that form the foundation of "modern insecticides and fungicides." They "disrupt pests' central nervous systems by causing nerve cells to fire nonstop" (and cause serious neural disorders in humans). They, along with carbamates, "account for roughly 1/3 of global insecticide sales and are heavily relied on by growers of alfalfa, almonds, carrots, grapes, apples, strawberries, peaches, walnuts, and above all, corn and cotton [cottonseed oil]." (Compare this list to the EWG's Dirty Dozen.)
________
1 Muscle, fat, organ tissue, and milk from livestock fed grass or crops that were exposed to pesticides also contain pesticide residues.
Posted by Bix at 12:29 PM

Because I have been accused by my good friend of becoming painstakingly neutral ;)
Let me add this...
Dear EWG, What good do lists like this serve if they don't also give people, people who have no choice but to buy pesticide-laden apples in the supermarket, a realistic alternative? They serve to frustrate. Maybe that's the point. Frustrate people enough and they revolt? I don't know. It's frustrating.

I admit I see a lot of news because of the round-ups Yahoo shows me when I log out of mail. And this list was there recently.

But the part you pointed out, that "Nearly all the studies used to create the list test produce after it has been rinsed or peeled." was not something I noticed then. I had to go looking for it to find it. Makes me wonder which were rinsed and which were peeled.

I'm all in favor of rinsing, but sometimes I'd rather EAT the peel...

Loved that last sentence. You just gave me my new banner.

neutral is a "good thing".

hah! color me entertained - use it in good health.