Last year, the FDA said melamine in food "does not raise concerns":

"In food products other than infant formula, the FDA concludes that levels of melamine and melamine-related compounds below 2.5 parts per million (ppm) do not raise concerns."
- FDA Issues Interim Safety and Risk Assessment of Melamine and Melamine-related Compounds in Food, FDA 2008

"Based on all available evidence, the consensus of regulatory agencies in the United States, Canada, Europe, and Japan is that the current levels of exposure to BPA through food packaging do not pose an immediate health risk to the general population, including infants and young children."
- Regulatory Meeting with Manufacturers and Users of Bisphenol A-containing Materials, FDA 2009

Days before Bush left office the FDA was drafting documents saying that mercury in fish wasn't enough of a problem to warrant health warnings.

How long will it be before the FDA okays salmonella in food? 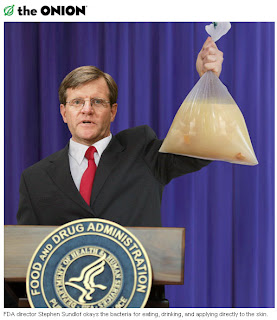 "Calling it "perfectly safe for the most part," and "not nearly as destructive or fatal as previously thought," the Food and Drug Administration approved the enterobacteria salmonella for human consumption this week."

"Following the announcement, the FDA released a 20-page report, which included evidence that salmonella is barely more dangerous than other live-culture products such as yogurt, and results from a clinical trial which found that participants who ingested salmonella were totally fine for up to three minutes."
- FDA Approves Salmonella, The Onion 2009

Okay, the last one isn't real. But it sure does reflect the behavior of the FDA - especially when you consider what happened last November:

On October 3, 2008, the FDA said no level of melamine in infant formula was safe. Then, on November 28, 2008, after small amounts of melamine and cyanuric acid (which, when they occur together, accelerate creation of kidney crystals) were detected in popular, brand name formula, the FDA said that anything below 1.0 ppm was safe.

Dr. Margaret Hamburg as new head of the FDA?
http://www.npr.org/templates/story/story.php?storyId=101751585
Food for thought!