According to this recent study, it doesn't matter:

I did learn something though: Weight loss - no matter how you get there - improves markers for health.

The study ran for 2 years, a little longer than other studies of its kind. Here were their goals:

Click for larger.
I don't see anything extreme, except for the last one, Diet 4, which held carbs to 35%. That would be unusual for the Average American unless they were making a concerted effort. Even then, it doesn't cut carbs as low as today's popular low-carb diets do.

By the same token, those 2 low-fat diets (Diet 1 and Diet 2) don't cut fat as low as popular low-fat diets do. Still, I would expect that if the participants really ate their chosen diet, and if macronutrients really play a role in weight loss, some trend would emerge. No trend did, not that reached significance. 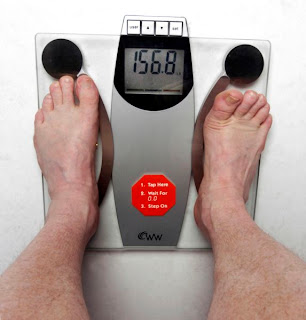 "Reduced-calorie diets result in clinically meaningful weight loss regardless of which macronutrients they emphasize."

They claimed that social support was more important than what people ate:

"Attendance [at group and individual counseling sessions] had a strong association with weight loss, and the association was similar across diet groups."

"These findings together point to behavioral factors rather than macronutrient metabolism as the main influences on weight loss."

Participants, on average, began to regain lost weight after a year, regardless of diet. (And they were getting a lot of reinforcement! See below.)

Participants had a tough time adhering to their protein/fat/carb prescription:All participants:When you look beyond weight loss, at 2 years all of the following markers for health improved, regardless of diet, with trends noted:Here's something I thought was strange - everyone's fasting glucose went up, regardless of diet. It increased the most in the high-fat groups, with the high-fat/high-protein group (Diet 4) rising the most. I wouldn't say the rise was clinically significant, but the direction, given weight loss, was unexpected for me.

I liked this quote:

"When nonnutritional influences are minimized, as they were in our study, the specific macronutrient content is of minor importance, as was suggested many years ago."

This study just seems to confirm that most people have trouble sticking to any imposed diet. I've tried both low-fat and low-carb. Low-fat didn't work for me. I was too hungry all the time and gained weight eating all the "low-fat" packaged foods with lots of extra sugar or artificial sweeteners to make up for the missing fat flavor. I then made a half-hearted effort to go low-carb, buying all the "low-carb" packaged foods and walking 2 miles every day. I was still addicted to sugar and cheated with desserts on the weekend. I didn't lose much weight until I broke my sugar addiction and kept carbs in the 100-150 g/day range while eating more "real" homemade foods. I quickly lost 20 pounds in about 3 months and then another 10 pounds the next 6 months, but had a very slow re-bound of 10 pounds over the following year and a half.

To get my weight loss rolling again, last July I started an 18/6 fast/eat intermittent fasting regime (6-hour eating period each day). I lost 20 pounds in about 5 months. My weight has now been nearly level for several months at 201-204 pounds, close to my original target of 200 pounds that I set when I weighed almost 245 pounds and I'm 6'1". I've also managed to add quite a bit of muscle mass from daily walking and running. I suspect that I have gained at least 10 pounds of muscle mass and lost at least 50 pounds of fat from my peak weight and I'm 56 btw.

I've read that intermittent fasting has some of the benefits of calorie restriction and is also good for normalizing blood sugar. So, I'm now continuing the 18/6 on weekdays to see if I can drop another 5 or 10 pounds this year. My ultimate goal is healthy longevity :)

@Bryan The human body is brilliantly adapted at going for hours and even days without food. Whenever I read about it, I'm even more amazed - all the hormones and signaling molecules. It's almost as if the natural way for humans (as opposed to grazing animals) to eat is on, off, on, off. With several hours in between. "Don't snack between meals," is one valuable Grandma axiom.