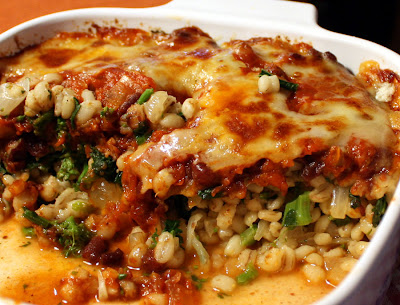 Prep time: 30 minutes (If everything is leftover).

Prep time: 6 hours (If you're starting from scratch, longer if you soak your beans).

Ingredients:1   Sauté onion in olive oil until golden. Toss in the barley and mix until heated through, 1 or 2 minutes. Toss in the rapini and mix. Season with tamari, gomasio, salt, pepper (and/or other seasoning).

Note: I like the onion to cook slowly so I add it to the pan with the oil at the same time, instead of heating the oil first. I also add a few sprinkles of salt at the beginning. The salt draws fluid from the onion, softening it as it cooks. If you like your onion with a little more tooth, hold off on the salt until later. I also add a few teaspoons of water as the onion cooks. It's a trick I learned during my low-fat days. It allows you to brown without adding too much oil. It's a good idea regardless of your fat restrictions because it distributes the oil better, and cooks the vegetables more uniformly (the water evaporates).

2   Pile the sautéed barley into a small baking dish. Layer the black beans over it. Layer the tomato sauce over the beans. Drizzle a teaspoon or two of the garlic oil over everything. Layer cheese on top. Broil on the lowest setting until browned. Cover and hold for a few minutes, about 10, to allow flavors to meld and all items to become evenly warmed. Serve.
________
A Note About Cooking Beans

I've gotten into the habit of cooking all my beans from those hard, desiccated little pebbles available in bags or bulk just about everywhere except gas stations. Once I stopped being intimidated by dried beans and started cooking my own, I was surprised at how stale was the stuff in cans.

Intimidated ... by all the instructions to:There's only one indispensible instruction you need for beans, which I learned from Diana Kennedy about 5 years ago ... don't undercook: "Never serve the beans al dente; they will be gassy and indigestible." Many beans that come from cans are undercooked.

You don't need to presoak dried beans. Doing so will cut down on cooking time, but it's not necessary. (Antinutrient proteins are denatured upon heating.) That 6 hours Prep Time above for non-leftovers? It's mostly for the beans. You haven't had really good black beans unless you've cooked them from scratch very slowly for a long time.

Try it ... put some rinsed dried black beans into a heavy pot, cover with lots of water and simmer for about 6 hours*, adding hot water as it gets low. (Never add cold water.) Let the water boil down towards the end until you're left with a muddy black bean mash. This is delicious, easier to digest than canned, and infinitely seasonable and mixable. Do it on the weekend and refrigerate for weeknight meals - like this one!

This looks marvey! I cannot wait to try it. Yum!

I can certainly vouch for the don't serve al dente beans comment, having made that mistake once or twice.

I totally agree with you about the beans. Although, I've been known to use a pressure cooker since that's the way my mother and grandmother cooked them.

I think I'm going to have to try your recipe. Sounds pretty tasty (looks it too).

OK, you talked me into it. I'll try it. Bix, are you back on the cheese now?

I'm so glad you said that about more flexible rules for cooking beans. I just read that in Gourmet, that it's OK to salt the cooking water for beans, that it does *not* make them hard. Thanks for the confirmation, Bix!

My apologies if you've commented or emailed and I haven't gotten back to you. I've been a little sidetracked.

An aside ... if you're over 50 and you're peeing a lot, if you're afraid to be away from a bathroom for over 2 hours, then you really, really need to get your blood sugar checked. Really. And not a fasting sugar either.

Ruby, No. I just lost my taste for it. I never was a big dairy eater.

I just want to say I have my first batch of black beans on the stove, and they are great! I haven't really done anything to them yet besides cook them, and already they're really good. They're going to be turned into soup later. I can't wait! (I followed Mark Bittman's "quick soak" method in his How to Cook Everything Vegetarian book.) Bring beans to boil for two minutes, then let soak for 2 hours, and then simmer until tender. Easy enough.

Ruby, I meant to ask ... what did you do with them? How did you season them, or did you mix them with anything?

Once I ran out of black beans and ended up cooking adzuki and black beans together. Now, it's all I do.