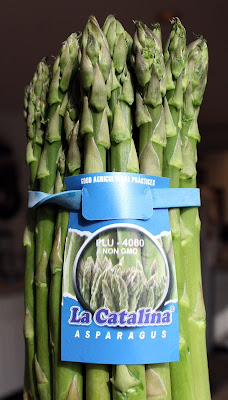 This does not give me confidence that asparagus not labeled "NON GMO" have not been genetically engineered.

I purchased these at the grocery store this week.

The prefix "9" was assigned to indicate that the food is organic. If these asparagus were organic (and therefore, by definition, not genetically engineered), the PLU would read 94080 instead of 4080. Producers go out of their way to clearly label "9" these days.
________
Photo: Bix
Posted by Bix at 1:35 PM

You are incorrect about the definition of organic. Organic had a definition before GMOs even existed. To be organic, something must be grown without the use of pesticides. So even if this product is non-GMO, if pesticides were used, it cannot be labeled organic.

Hi Judy. You can read up on our National Organic Standards here:

Organic Does Not Mean Pesticide-Free

There certainly are "allowable" pesticides and herbicides that are considered organic and are sold as such by places like Territorial Seeds, Johnny's Seeds, etc.

Well, that's not so bad. You made it sound as though it was deliberate. Still, I didn't know about that whole 95% thing. I guess the best thing to do is to grow your own food. (also, you can always check the ingredients; Theo chocolate is an example of a great USDA Organic product)