Vitamins Are Not Innocuous 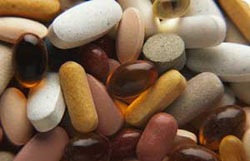 The Sunday New York Times Magazine runs a feature called Diagnosis. The November 12th issue described a man who presented with a wound (an incision from a hernia operation) that would not heal ("The Healing Problem"). He also had too few red blood cells and too few white blood cells, especially neutrophils. He felt tired, achy and had a fever. He was admitted to the hospital and received weeks of intravenous antibiotics. The wound still did not heal.

The resident worked and studied and ran tests. Nothing. Then the man's wife showed up with a list of his vitamins. The diagnosis? A copper deficiency caused by ingestion of too much zinc.

The resident chimed, "We just don't think of vitamins as something that can be harmful."

This week an MD wrote in Letters, "The case serves to emphasize once more that "all natural" does not necessarily equate with "healthy" even with something as seemingly innocuous as vitamins."

Vitamins, "innocuous"? "all natural"? They're anything but. I'm talking about the kind you take from a bottle, not the kind found in our cells. The chemicals in a bottle can be helpful but they can also cause problems when taken in excess - from simple acne to bone loss.

I don't know why reviewing someone's supplement intake is considered novel or in this case worthy of praise. In my experience it's pretty routine. Every person who studies nutrition has to take a class in micronutrients and be able to recognize deficiency and toxicity states of every vitamin and essential mineral. Nutrition education wasn't a big part of the curriculum for the older docs I've worked with. But med students these days take nutrition classes. Well, some.

This man had gastric bypass surgery 4 years prior. He most certainly met with a provider who could assess his unique nutritional needs. Why was his later deficiency state a surprise? (For that matter, why wasn't the cause of his anemia investigated 6 months before he landed in the hospital? A review of his supplements then may have resolved the anemia and precluded his wound healing crisis.)