Cordain argues that since man has not evolved sufficiently in the approximately 10,000 years during which farming took hold - to be consuming products of farming: grains and legumes - his optimum diet, based on the bulk of his evolutionary past, would consist of the minimally processed, wild plant and animal foods of the pre-agricultural hunter-gatherer.

The hunter-gatherer, according to Cordain, did not eat the following: 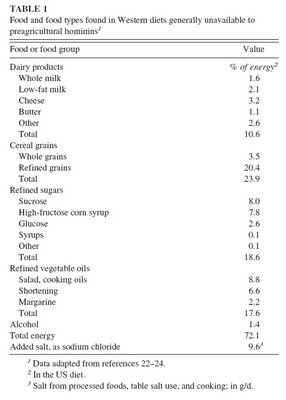 "Although dairy products, cereals, refined sugars, refined vegetable oils, and alcohol make up 72.1% of the total daily energy consumed by all people in the United States, these types of foods would have contributed little or none of the energy in the typical preagricultural hominin diet."

There is merit is in many of his points. Who would disagree that our overly processed diet is contributing to modern day chronic diseases? I have a few concerns though that prevent me from recommending his food plan at the moment. I'll elaborate after I eat some not-so-wild turkey.

In the mean time, take a look at the above table and see if you can pick out one line that looks like it doesn't belong.
Posted by Bix at 4:45 PM