The Season for Walnuts 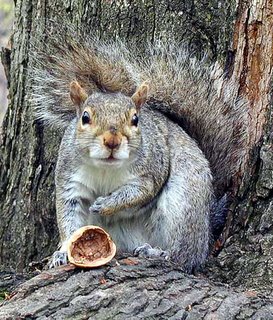 It's October. Walnuts are in season. And by the looks of this study1, the season for walnuts should be during every meal, at least meals that are high in saturated fat. Squirrel them away!

Researchers in Spain fed a high-saturated-fat meal to two groups2. One group received 25g olive oil (5 teaspoons) as part of the meal. The other group received 40g walnuts (8 shelled).

Folks who ate walnuts had better elasticity in their arteries after the meal than folks who ate olive oil.3 Elasticity is good. Dilation is good. Stretch, baby, stretch.

After you eat a meal high in saturated fat, the elasticity of your arteries typically declines. It recovers after about 6 hours, as long as your blood vessels don't have to contend with another high-fat assault. Non-stop high-saturated-fat assaults can lay the groundwork for some pretty rigid vessels.

I'm a big fan of consuming olive oil. So I'm going to emphasize another finding of this study. The addition of either olive oil or walnuts to the meal helped fend off oxidation of LDL cholesterol and cut short production of inflammatory compounds - both of which are stimulated by the likes of salami and cheese sandwiches. Inflammation and oxidation are thought to contribute to plaque formation (a topic Dr. Davis writes so thoroughly and effortlessly about on his blog). So don't let this study, financed in part by the California Walnut Commission, retard your use of a good extra-virgin olive oil.

~~~~~~
1 Cortés B, et al. Acute Effects of High-Fat Meals Enriched With Walnuts or Olive Oil on Postprandial Endothelial Function, Journal of the American College of Cardiology, September 25, 2006.
2 The meals consisted of salami and cheese and contained 80 grams of fat. That's a good 720 calories contributed by fat alone. High-fat? I'll say.
3 This study actually used a desirable crossover design, meaning it was performed at least twice using the same people. Intervention and control groups are switched in the second round. The groups here consisted of people with normal cholesterol and people with high. Benefits were found regardless of cholesterol level.

Photo credit goes to Unexplained Bacon.
Posted by Bix at 9:42 AM