Growth Hormone and Your Pork Chop 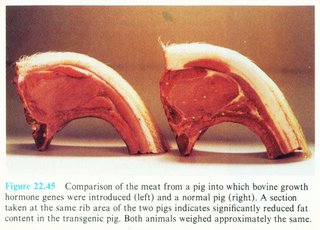 A study that compared pigs3, some with lots of GH and others with normal amounts, found those slaughtered after reaching 92 kg (203 lbs) had:

... than controls. Can you imagine?
The authors of this study concluded:

"If levels of growth hormone secretion could be precisely regulated during the rapid growth phase of market hogs, it might be possible to provide consumers with an ultra-low-fat pork product."
- Lipid Composition of Carcass Tissue from Transgenic Pigs Expressing a Bovine Growth Hormone Gene 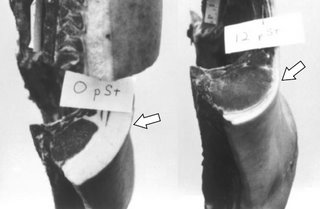 The pigs in the study above were transgenic, meaning their DNA had been altered to contain a gene from a cow, a gene that manufactures GH (bovine GH or bGH). That's a handy way of upping GH. Another way is to manufacture the GH outside of the pig, usually in a bacterium (called recombinant porcine GH or rpGH), and then inject it back into the pig ... often.
(Photo shows effect of injected GH (pST) on right subject, left subject received no GH ... That's a lotta fatback.)

This was just one study among many. I don't believe GH is currently approved for use in pigs, either exogenous (injected or patched) or endogenous (genetic modification), because of problems with fertility, arthritis, heart and kidney disease, and impaired immune responses. It's under review though. (In 1993, the FDA approved GH for use in cows to increase milk production.)

If It Does That To Pigs, Can It Do That To Us?

Not only does growth hormone reduce fat stores, but it stimulates muscle and bone growth. Those are the most pronounced effects. Human growth hormone (hGH) is prescribed for people with GH deficiencies.

It's also become fairly attractive to people who for some reason would like to see a little less fat and a little more muscle definition in their physiques. I imagine that relatively healthy people seeking those attributes might evolve to look something like Madonna. That's not an indictment, but one wonders how a 48-year-old mother of 2 who has been known to enjoy her cigarettes and fermented barley brews manages to strike such a pose. (Click for larger.) 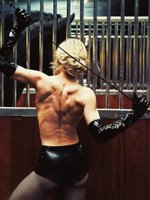 ~~~~~~
1 I don't endorse the use of hormones in livestock or peoplestock. I just like to talk about it.
2 Growth hormone is also known as somatotropin (ST).
3 Photograph is the best representation of the study I could find. It's not directly related to these researchers' work.
Posted by Bix at 9:13 AM

That was really good information. I know that GH is used in our conventional meat but choose to not purchase it because it is not good for your health. Although, lately I have been hearing about those who are taking it for fat loss and anti - aging. Is this the same hormone? I believe that what is prescribed is human growth hormone made from urine? I know that L-arganine is great to support HGH for regeneration and repair. My mother is interested in learning more. Was wondering if you have any info you can share on HGH.