Quick, if seeing innards makes yours convulse, avert your eyes.

Below is a cow's stomach.1 A cow is a ruminant, meaning it eats the same food more than once. The first feast is chewed, swallowed and then regurgitated for a cordial second chew. Regurgitated mass is known as cud, and cows chew theirs, or ruminate, with aplomb.

All this regurgitating and reswallowing is necessary to reduce cellulose fibers (and other carbohydrates and proteins) to a size that resident bacteria, protozoa, and fungi can munch on. It's facilitated by a uniquely designed stomach, one consisting of 4 chambers: a rumen, reticulum, omasum, and abomasum. 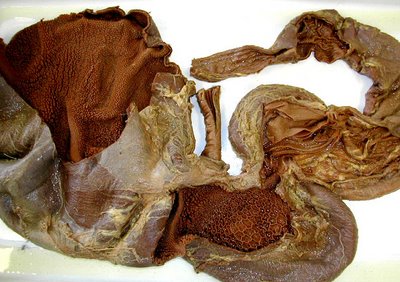 The chambers are recognizable in the photograph from left to right. The first 3 chambers, which together comprise more than 3/4s of this digestive compartment, are more precisely defined as a forestomach; they act as a massive fermentation vat. The last chamber, the little abomasum (barely visible off to the right), is the cow's true stomach and by itself bears resemblance to a human stomach.

You gotta love the specialization and complexity of a ruminant's gut, at least I do. Reverse peristalsis? What a deal. There have been some mighty fine meals in my past for which I would have welcomed a little reverse peristalsis and rumination. 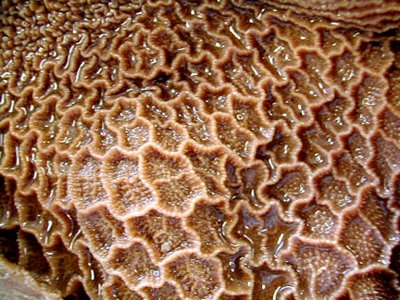 Photo above shows a close-up of the 2nd chamber, the reticulum.
It's from this chamber that undigested matter is compressed and pushed back up the esophagus.

Ruminants evolved to consume grasses and other plant matter structured largely of cellulose. These fibers are digested by billions of microbes in the forestomach (up to 50 billion bacteria in 1 milliliter of rumen fluid!), an activity that's performed best at a pH of 6 to 7. Cows secrete a lot of saliva, over 100 liters a day, in part to maintain that all-important rumen pH.

The pH decreases (becomes more acidic) when cows are fed grain in lieu of grass. This isn't a good thing for the cow. In fact, according to the Merck Veterinary Manual, "Grain overload is an acute disease of ruminants that is characterized by indigestion, rumen stasis, dehydration, acidosis, toxemia, incoordination, collapse, and frequently death."

When the pH drops to around 5.5, protozoa begin to die off, and the bacteria population undergoes marked change.

Here's where pieces of the recent E. coli-contaminated spinach puzzle begin to fit.

The Dirty Greek clued me in with his post "Why Is The Spinach Contaminated?" where he cites a NTYs article written by Nina Planck, author of Real Food: What to Eat and Why.

He found her same passages of interest:

"E. coli is abundant in the digestive systems of healthy cattle and humans, and if your potato salad happened to be carrying the average E. coli, the acid in your gut is usually enough to kill it.

But the villain in this outbreak, E. coli O157:H7, is far scarier, at least for humans. Your stomach juices are not strong enough to kill this acid-loving bacterium, which is why it’s more likely than other members of the E. coli family to produce abdominal cramps, diarrhea, fever and, in rare cases, fatal kidney failure.

Where does this particularly virulent strain come from? It’s not found in the intestinal tracts of cattle raised on their natural diet of grass, hay and other fibrous forage. No, O157 thrives in a new — that is, recent in the history of animal diets — biological niche: the unnaturally acidic stomachs of beef and dairy cattle fed on grain, the typical ration on most industrial farms. It’s the infected manure from these grain-fed cattle that contaminates the groundwater and spreads the bacteria to produce, like spinach, growing on neighboring farms."

[Recall the billions of bacteria per milliliter of stomach fluid. Many die off, but imagine the potential infection pool of just one grain-engorged cow.]

"California’s spinach industry is now the financial victim of an outbreak it probably did not cause, and meanwhile, thousands of acres of other produce are still downstream from these lakes of E. coli-ridden cattle manure."

Only yesterday, an Iowa company recalled 5,200 pounds of ground beef, suspected of being contaminated with E. coli O157:H7.
~~~~~~
1 These photos of mammalian digestive organs were taken by students and faculty at the University of Washington. More can be found here.
To me they're works of art, both the pictures and the anatomy.
Posted by Bix at 7:42 AM