But, sshhhh, we're not supposed to talk about it. 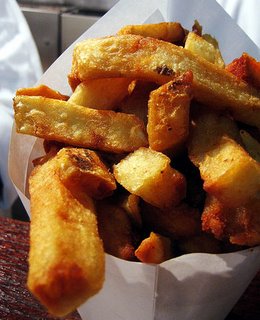 This isn't a post about fats: trans, hydrogenated, saturated, girth-adorning, or otherwise. Really.

You would think, wouldn't you, that if a food contained chemicals that were harmful to the food's target audience (dog chow, swine chow, fish chow, elk chow, people chow, etc.), regulatory agencies in charge of assuring the safety of that food would prompt the food's makers to issue public disclosures. At least that, no? Better would be to ban those substances outright, but I guess we get what our tax dollar, via our political climate, will pay for.

Granted, one needs to know if a harmful chemical is there, and if it's there to any great degree - say, an amount that might result in 3 more cancer cases in 10,000 humans1 when consumption of a "normal" amount of said defiled food occurs.

Specifying an amount is important because an unbelievable motherload of apparently benign foods contain toxins. The FRE likes to mention this when I push the broccoli and cauliflower, foods that even in the raw, fresh, unprocessed state contain cyanide compounds. But no normal person with normal faculties and even above-normal appetites would probably ever consume enough raw broccoli to bring about cyanide asphyxiation. (That statement doesn't hold for raw cassava/manioc or apricot pits, which are indeed a cyanide-related health hazard.)

Thus, governing bodies don't mandate warnings the like of which we see on cigarette packages:

Enter the case of the chemical acrylamide.

First, we didn't know it was there. Then when we knew it was there (and boy, was it there), we, rather, top government health dogs in the US decide to ... study it. In the meantime, while they're studying it, top dogs in Congress are proposing legislation that would prevent individual states from enacting their own regulations or public disclosure guidelines (more on that later).

What in blazes is ah-krill-ah-mide?

It's a chemical used in "grouts and cements, pulp and paper production, ore processing, permanent-press fabrics, and dye manufacture." 2 It's also used in waste water treatment. That was industrial use. Its most ubiquitous presence (it was thought until 2002) was in tobacco smoke.

In 1990, the state of California listed acrylamide as a chemical known to cause cancer or reproductive toxicity.2 It's a known neurotoxin in humans. At the time, deleterious health effects were feared mostly in workers who handled the chemical.

Why the sudden spike in interest?

In 2002, Swedish researchers reported finding the chemical in foods, especially starchy food that had been fried or baked. The worst culprit: fried potatoes, aka, chips.

Since 2002, the FDA has spent time designing acrylamide detection schemes and measuring acrylamide content in foods. They've actually done a fine job; you can explore the fruits of their labors here.

While the FDA is consumed by generation of data, and keeping a lid on dissemination of warnings3, scientists in Europe have come up with a few methods for reducing acrylamide in food:Humans have probably been consuming this odious chemical for as long as they've been heating their food. This is so because acrylamide is not an additive or environmental contaminant but a natural byproduct of a normal reaction between carbohydrates and proteins (Malliard reaction). Some foods, notably olives and prunes, don't even need to be heated to manufacture acrylamide.

The good news (sadly, this is news not discussed in thrill-seeking media) is that our bodies can detoxify some amount* of acrylamide given good raw materials, e.g. glutathione found in our cells4, and a vigorous constitution. Just because something can cause cancer doesn't mean it will. Why, I say a prayer of thanks for my liver every day - especially right before I eat mercury-laden fish.

This post was spurred from an email I received recently from a faithful expatriate reader (T) and from Catherine's comment in my previous post where she questioned the prudence of roasting nuts.
To T: This isn't the last of my acrylamide diatribes.
To Catherine: Roasting nuts does oxidize some of their fats, and it will increase arcrylamide content. For those 2 reasons, at least, raw is better. But for taste? Well, life is short :)
Posted by Bix at 8:29 AM