I can't imagine what's holding up development of acrylamide-reduced foods in this country - or at least distribution of acrylamide warning labels, display signs, public service announcements, and discount coupons.

Maybe if you're going to expend resources to fix a problem, you'll want to first come to a consensus that there is a problem. It's easy for me to think that since the FDA hasn't said anything in the last 4 years about the average American consuming almost twice their stated "acceptable daily intake of acrylamide" that it isn't a problem. If that's true, why does the EPA still regulate its presence in drinking water? And why has the state of California added acrylamide to its Proposition 65 "list of substances that are known to cause cancer, birth defects or other reproductive harm"?

Somebody should have told them acrylamide wasn't a problem before they took legal action against some supersized corporations:

"California filed suit in August, 2005 against McDonald's; Burger King; Frito-Lay, owned by PepsiCo; and six other food companies, saying that they should be forced to put labels on all fries and potato chips sold in California."
- California Wants to Serve a Warning With Fries 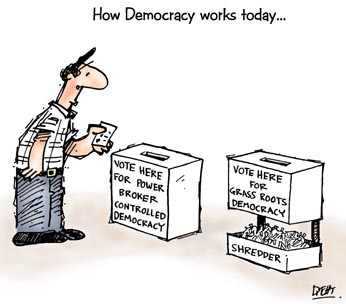 I do wonder if federal foot-dragging regarding warning labels is related to the "National Uniformity for Food Act" which passed on March 9th, 2006 in the House (HR 4167) and is sitting in a Senate committee waiting for a vote, which may be imminent now that the Senate's August recess is caput.

This bill, supported by the powerful Grocery Manufacturers of America, and some other large supermarket chains and food industry groups, would negate states' ability to regulate acrylamide and other chemicals differently than the federal government does.

It would overturn California's Proposition 65. It would bring to a halt California's legal proceedings against McDonald's, Burger King, Frito-Lay, etc. Do big lobbies have big pull in big government?

The non-profit, independent publisher of Consumer Reports, Consumers Union, has written in opposition to the bill:

"The bill is not a simple food-safety uniformity bill, as its proponents claim. Under the guise of national "uniformity," this bill would eliminate critical state laws that protect consumer health while leaving in place an inadequate federal system based on the lowest common denominator of protection."
- Oppose H.R. 4167, "Food Uniformity" Bill is Uniformly Bad for Consumers

I guess it's easy to defend states' right if the rights you're defending happen to mesh with your beliefs. I would be supporting this bill if the feds were more conscientious than the states in protecting consumer health. Given the FDA's foot-dragging on acrylamide, against a backdrop of California's Proposition 65, it doesn't look like they are.

If you'd like to take a small step against passage of this bill, tell your Senators how you feel. The Organic Consumers Association via Democracy in Action have made it easy with this form (Click it and it will send you to the form submittal site - scroll down to the bottom.):