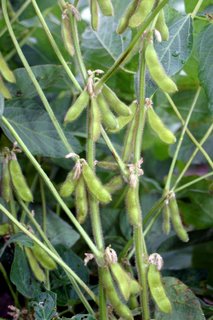 Melinda has been bending my ear about soy lately. Melinda is no foodie-come-lately, so every time she sends me something or I have occasion to read something about soy, I do. I can't say I'm thoroughly educated on the soy story, but I'm at least familiar with the opposing arguments.

I wouldn't call myself a soy promoter nor a soy detractor. That is, I don't subscribe to the idea that soy (or any single food) is a miracle worker. And I don't think soy beans alone are the harbinger of so many great ills of the 21st century.

However, I'm beginning to see that some caution about soy consumption is probably warranted. I'm not convinced that the soy bean itself is harmful - although some of its chemically-derived isolates and extracts leave a lot to be desired. The beneficial (or detrimental, whichever your take) chemicals noted above as responsible for the beneficial (or detrimental) effects (phytates, trypsin inhibitors, and isoflavones) are found naturally in a number of foods, including grains, beans, peas, nuts, seeds, tomatoes, potatoes, herbs, etc. But since soy's presence is now just about ubiquitous in our food supply ...

"By 2004, 80 percent of all vegetable oils would come from soybeans, and almost every single processed food would contain soy."
- James Nestor, Too Much of a Good Thing? Controversy rages over the world's most regaled legume, San Francisco Chronicle, August 13, 2006

... it wouldn't be a bad idea to curtail consumption when and where I have a choice. The levels at which our bodies are being exposed to these compounds, regardless of how "natural" they are, predisposes them to acting like pharmacological agents. I'm sure my folks would have an eye-roll in their graves to think their daughter succumbed to a soybean-related overdose.

PS - I feel this way about wheat too, and corn. Humans did not evolve consuming large quantities of the particular foods, especially grains, we find ourselves consuming today - which sets humans' guts up for a digestion and metabolization challenge. Such is the case with wheat proteins (gluten) and corn extracts (high fructose corn syrup).

PS2 - Visit my post on Isoflavones in Soy Foods for a little more in-depth.