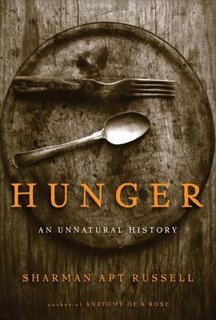 My interest in life is nutrition, the good, the bad, even the ethereal - the things that nurture us that aren't food-related. Today1 I'm thinking mostly about the bad. In my little part of the US, obesity is often the face of bad nutrition, or malnutrition. But I realize in other parts of the US and the world, starvation is the face of malnutrition.

I've studied some of the repercussions of food restriction - on a micro scale, inside the body. It wasn't until I read Sharman Apt Russell's Hunger: An Unnatural History that I became aware of starvation's effect on a macro scale. Her chapter on how hunger shapes cultures is absorbing, at least it absorbed me.

About anthropologist Colin Turnbull's 1965 visit with the Ik, a group of Africans "who were living and starving near the northern border of Uganda and Kenya", she writes:

"Literally, it was every man - and every woman and child - for himself. Husbands did not share with wives, nor wives with husbands, nor parents with children, nor children with parents. Cooperation became maladaptive. Only the strong, the selfish, and the predatory survived."

Russell's discussion of Mao's China in the early 1960s, its association with "the biggest famine in recorded history" and the social changes adopted by the people to survive were hard to read.

The book doesn't just describe the anthropology of hunger. Besides involuntary or externally-caused hunger, Russell writes about voluntary fasting, what it does to the body, and how it's been used throughout history to make personal, spiritual and political statements. She also discusses the challenges to refeeding - economically, socially, and physically (and I thought the starvation part was bad).

It's a little book, a fast read, informative, and sometimes harrowing.