The Earth is the Mushroom's Gut

A more fitting title would be Vitamin D From Mushrooms, but I caved to the peculiar.

Good news1 for vegetarians who wear sunscreen. Mushrooms may soon be able to satisfy humans' need for vitamin D:

"... a single serving of white button mushrooms - the most commonly sold mushroom - will contain 869 percent the daily value of vitamin D once exposed to just five minutes of UV light after being harvested."
- Light-zapped Mushrooms Filled with Vitamin D 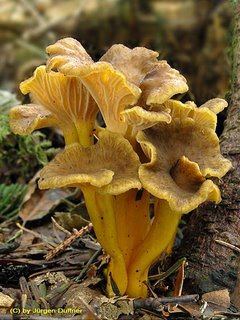 That's a lotta D. It hinges on being a little too much D. The 869% of 400 IUs is 3476 IUs. Intakes of as little as 2000 IUs can result in nausea, vomiting, anorexia, hypertension, calcification of soft tissues (heart, lungs, kidney, blood vessels), and kidney failure. Children are especially vulnerable. Still, there's more of a problem with too little vitamin D in Americans' diets than too much. And with vitamin D's emerging roles in cancer and the immune response, techniques for boosting intake are worth exploring. Maybe they'll work out the dose issue before the buttons hit produce aisles. (Pictured is Cantharellus tubaeformisa, a type of chanterelle mushroom thought to be naturally high in vitamin D2.)

The primary source of vitamin D in food is from animal tissue, which supplies the D3 (cholecalciferol) form of the vitamin. There's some vitamin D in plants, in the form of D2 (ergocalciferol), but the amount is, or was thought to be, a pittance compared to what liver, fish (an alternate reason to down some omega-3 rich salmon), and milk, especially fortified, provide. The biological actions of D3 and D2 in the human body are thought to be equivalent. Although cats, birds, and monkeys have been shown to discriminate between the two, favoring D3.

Mushrooms aren't technically plants. They don't intake carbon dioxide and give off oxygen as plants do. They intake oxygen and release carbon dioxide, like we do. They have no chlorophyll, so they don't photosynthesize for energy. Yet like us, they need photosynthesizing plants for food, and for the O2 they give off. All of this and more makes a mushroom closer to an animal than a plant in taxonomy, but a mushroom isn't an animal either.

In fact, somewhere between the time I finished grade school and now, biologists created 3 more Kingdoms besides plants and animals. One of them is the Fungi, under which mushrooms, molds, and yeasts fall. The other 2 are Monera (bacteria), and Protista (algae, protozoa).

While trying to discover what in blazes mushrooms are doing with the vitamin D they make (I can't imagine it's being used to build strong bones), I ran across these fun fungi facts:No wonder people spend a lifetime studying these creatures.

~~~~~~
1 The news was reported at a poster session of the FDA's annual Science Forum in April (below), although coaxing mushrooms to produce vitamin D by exposing them to radiation was being studied for years. The part we still don't know is the extent to which humans can absorb vitamin D from a fresh mushroom.

FDA’s Center for Food Safety and Applied Nutrition and the Mushroom Council Collaborate to Optimize the Natural Vitamin D Content of Edible Mushrooms and to Examine their Health Benefits in Different Rodent Models of Innate Immunity.
Posted by Bix at 7:04 AM