Domestication of the Fig

Nine preserved figs were recently found in the Jordan Valley. The discovery team estimated their age at about 11,000 years. Given the nuclear one-upmanship of late, today's organic matter may not last through the next few decades, let alone 11 millennia.

"We suggest that these edible fruits were gathered from parthenocarpic trees grown from intentionally planted branches. Hence, fig trees could have been the first domesticated plant of the Neolithic Revolution, which preceded cereal domestication by about a thousand years."
- Early Domesticated Fig in the Jordan Valley, Science Magazine, June 2. 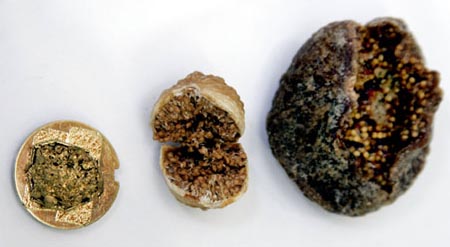 "An 11,400-year-old fig found in Israel (left) may be the result of the earliest known form of agriculture, scientists say. The ancient fig is similar in size to a variety still cultivated in Iran (middle) but is considerably smaller than a more common Turkish type (right)."
- Photo and caption: National Geographic News
Early farmers were smart. Figs are sweet, calorically dense, travel well, can be dried for storage, don't need to be cooked, and come in individual serving sizes. Figs have it all over rice1. For instance, you don't have to wade through leech laden waters to harvest them.

"In 2003, archeologists discovered ancient seeds from cultivated squashes in coastal Ecuador, at the foot of the Andes, which may be older than any agricultural remains in Mesoamerica."