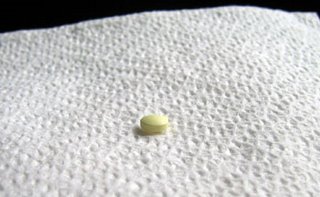 During my years of study, although what day isn't ripe for learning, I remember sitting dumbfounded in a class on research design. The instructor was enthusiastically (thank the holyheavens for enthusiastic instructors) outlining the challenges to designing good research.

He posed the question, "If results of an intervention were equivalent to those of a control group, does that mean the intervention was ineffective?"

"So, you see, it depends," he said, "on how the study is controlled." There he launched into a discussion on randomization, blinding, and the meaning of "placebo", the last of which left my jaw slack, my mouth ajar, and my expression, I guess, one more of dumbfoundedness than of academic acumen. To this day, I still don't understand the placebo effect.

Placebo has come to refer to a substance or therapy, often administered to a control group, which is thought to be inactive or inert, e.g. a sugar pill. But if a placebo is so benign, why can we measure an effect from it? Why do we go to the bother of providing a "dummy" therapy to a control group? What exactly is that sugar pill, or the act of taking that sugar pill doing that it can dissolve a migraine, erase a wart, or in the case of the study in the prior post, lower cholesterol?

While I'm talking about that policosanol study ... It astounds me that researchers, healthcare workers, industry cheeses, the media, etc. are quick to highlight the ineffectiveness of some therapy when it fares poorly against a placebo, but fail to shine a floodlight on the effectiveness of the placebo. The sugar pill in this study, a lactose monohydrate and microcrystalline cellulose formulation, was as good as, if not at times better than, the policosanol (for reasons yet to be fully elucidated) at lowering lipids. If you say it worked because the participants believed it would work, what exactly is the mechanism for that? And why doesn't an answer to that question spark more research? Especially when it could mean ditching a $100/month statin habit for a cheap, side-effect-free, easily obtainable sugar pill?

Doesn't anyone have the courage to stand up at one of those stuffy pharmaceutical conference-clambakes and decry the state of the placebo?

In 1998, the American Psychological Association (APA) published a controversial study.1 It was a review of 19 double-blind, placebo-controlled trials investigating the effectiveness of antidepressant medications. Their findings:

"As a proportion of the drug response, the placebo response was constant across different types of medication ... The inactive placebos produced improvement that was 75% of the effect of the active drug ... and the correlation between placebo effect and drug effect was .90. ... These data raise the possibility that the apparent drug effect is actually an active placebo effect."

Eight years later, the antidepressants Zoloft and Effexor are 2 of the top 20 drugs sold in the US, with 2005 sales in excess of $5 billion.

~~~~~~
1 Listening to Prozac but Hearing Placebo: A Meta-Analysis of Antidepressant Medication
Posted by Bix at 9:41 AM