See my Policosanol Update for some disappointing news. 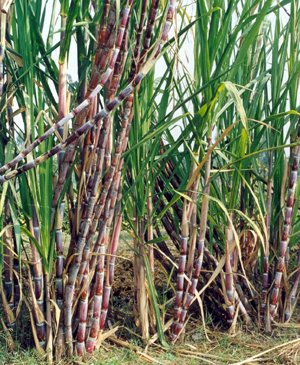 If my cholesterol was high, and my attempts at diet and exercise weren't successful enough to lower my numbers down to where the NIH's National Cholesterol Education Program recommends (total cholesterol: less than 200, LDL: less than 100, HDL: above 40), and I was facing a well-intentioned physician who was scribbling a script for a statin ... I might try policosanol first.

Not that there's anything wrong with statins. I'm just a little too familiar with their deleterious side effects, both to the body and the pocketbook. And given the precarious state of the government's prescription drug benefit for seniors (Medicare part D), I wouldn't be too eager to embark on a costly long-term therapy likely to follow me into my rapidly approaching senior years.

Policosanol is actually not one substance. The word is a general, inclusive term for many ("poli-") waxy or fatty alcohols. These aren't alcohols in the whisky or wine sense, but fats that just happen to have an alcohol component. The bulk of the research was done with policosanol derived from the waxes of sugar cane (shown above). It can also be extracted from yams and beeswax. Some studies looked at one or another of its components, e.g. octacosanol. But the mixture or poli-blend was shown to be more active than any individual component, inferring a synergistic effect.

The research on policosanol shows it to be statistically equal to or better than many statins it was compared to [including simvastatin (Zocor®), pravastatin (Pravachol®), lovastatin (Mevacor®)] at lowering cholesterol, leading the American Heart Journal in 2002 to call it a "very promising" alternative to statins. 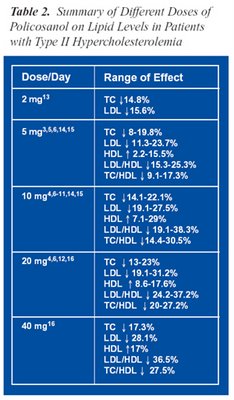 Rather than fill a paragraph with lots of numbers, I've swiped a table from Mark Janikula's outstanding review article Policosanol: A New Treatment for Cardiovascular Disease? that summarized doses and their effects (see right). I was planning to list citations for supportive research at the bottom of this post, but since Mr. Janikula did it so well in his review, I'll refer you there.

Similar to statins:
Additional to statins:
Adverse Reactions
Side effects for policosanol were found to be equal to or less than placebo:

Primary Mechanism
Policosanol is thought to act in a similar manner to statins, that is by inhibiting the manufacture of cholesterol in the body, primarily in the liver where the lion's share of cholesterol is made. If research continues to support this mechanism, policosanol use, as well as statin use, may occasion the need for supplemental CoQ10. See my post, Statins and a Not-well-publicized Side Effect

There are other mechanisms which haven't been fully explained. One results in reduced platelet aggregation, that is, a reduction in blood clotting. Dare I use that nonsensical phrase: it thins the blood. This is good if you're looking for ways to help blood move through partially clogged vessels, but not so good if you're planning surgery or any other body-piercing activity. So, if you're taking warfarin (Coumadin®) to ward off blood clots, it's a good idea to consult with your physician before trying policosanol.

Under the Radar
Why isn't policosanol getting the same press as its possibly lesser cousin, the statin? For one, policosanol was discovered, developed, and researched primarily in Cuba, the land of sugar cane. Now, I'm not a political junkie, but I believe our trade embargo with Castro's communist nation, an embargo that bans scientific exchanges, is still intact.

For two, I would speculate that US pharmaceutical giants don't see to profit as handsomely from an uncomplicated natural product derived from sugar cane, as they do from their proprietary concoctions. And since lucrative patent rights would be an uncertain prize, you won't see these companies stuffing their sales reps' attaches with brochures and samples and branded perks like policosanol pens, policosanol mouse pads, policosanol umbrellas, and policosanol melon ballers.

Drawbacks
Since we can't import the actual policosanol (or even a recipe for same) that Cuban studies are finding so promising, we have to do with a homemade variety which may or may not prove as effective. Even if we could buy Cuba's product (Canada can since it hasn't imposed a trade ban), regulation of supplements in this country is so rinky-dink there's no guarantee that what the label says is actually inside the bottle.