While researching an alternative therapy for cholesterol reduction (post to come), I stumbled upon this study in the Lancet (requires free registration):

It's not breaking news, in fact it's over a year old. And the gist isn't anything you couldn't conjure in your sleep. What struck me was the breadth of it, in both number of subjects and variety of population. It included almost 30,000 people from 52 countries - men and women, young and old, from every inhabited continent, representing almost every racial and ethnic group on the planet.

What's stunning is their implication that over 90% of heart attacks worldwide are preventable. Prior to this it was thought that 50% of heart attacks were caused by some combination of the 9 modifiable risk factors in this study, and the remaining 50% were caused by unexplained phenomenon - maybe something in the environment, maybe an inborn error of metabolism, who knows.

Now we know. Here are the 9 risk factors that the INTERHEART study claimed were responsible for over 90% of heart attacks: 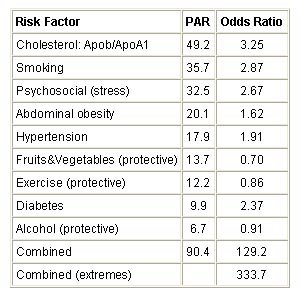 Each of these risk factors was found, by itself, to be predictive of heart failure.

Here are a few notes about the above table:Each region and ethnic group had its unique risk list, and men scored differently from women, young from old, etc. But when all were grouped together, the top 2 factors - responsible for about 2/3's of all heart attacks - were smoking and unhealthy cholesterol levels.

Every one of these 9 factors is, by and large, within our control. But a claim that might be drawn from these findings - that heart attacks are a result of choices we make - is a claim no cardiovascular disease patient wants to hear, nor one an adroit healthcare professional is likely to share with you - not after the fact, anyway.

Dr. Jean-Pierre Després, a discussant at the presentation of the INTERHEART research, expressed his personal outrage: "Mankind is doing a good job of killing itself."
Posted by Bix at 12:22 PM