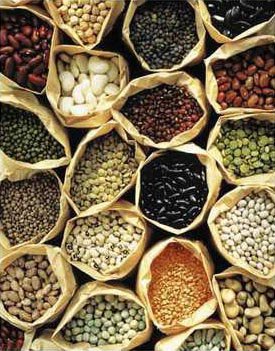 You can't work at a diabetes center and not be privy to all the significant or not-so-significant, probable or possible, inherited or what-I-had-for-breakfast causes for a person's blood glucose (BG) to rise and fall.

Here's a minor player: resistant starch (RS). Rather, it used to be a minor player, but it's slowly muscling its way into the line-up of sound dietary therapies - not just for people with diabetes.

What is RS?
RS is similar to fiber, in that it's a carbohydrate that doesn't get digested. But its many forms aren't technically (structurally) like fiber, so its inclusion in the "Dietary Fiber" call-out on a Nutrition Facts label isn't a sure thing. (e.g. A raw potato has a lot of RS. Cook it and that RS becomes digestible. Let it cool and gelatinize and the starch becomes resistant again.)

RS can hamper spikes in BG that occur right after eating, an advantage for those with diabetes or at risk for it. This happens because much of the starch fails to get disassembled into its elementary glucose units, so it doesn't get absorbed, so it doesn't add to the gob of glucose entering the bloodstream after a meal. It may also slow the emptying of food from the stomach. The overall effect is minimal though, and difficult to measure since there are various types of RS, and individuals respond differently to them. Atkins products take advantage of this mechanism by formulating some of their prepackaged foods with RS, giving them a low "net-carb" rating (a rating soon to be discontinued).

That was the easily understood advantage. The advantages coming to light have less straightforward mechanisms.

The mechanism is thought to be via the action of products (short-chain fatty acids: SCFAs) of bacteria in the colon - bacteria that get to eat all the starch that you didn't.

In this study, researchers replaced varying amounts of the carbohydrate in a meal with RS. At the 5.4% replacement level*, fat oxidation increased by up to 23% when compared with no RS. And the fat burn continued for at least 24 hours. Curiously, more or less than 5.4% RS was not necessarily better. A 10.7 % replacement saw fat oxidation plummet to levels indistinguishable from that seen with 0% RS.

The mechanism, as above, is thought to be via the action of SCFAs produced by bacteria in the colon. One explanation for why higher doses of RS don't provide as much benefit is that fewer of these bacterial byproducts are made, since RS speeds transit time (of waste in colon) and literally dumps the RS before colonic bacteria can do their business.

These advantages put yet another damper on losing weight the high-protein way. There are a few other benefits to RS that I won't belabor this post with, benefits I suspect researchers are working furiously to document so they can patent their RS supplements and food formulations.

Food Sources
RS is found naturally in foods. A typical American diet provides from 5 to 10g/day. You can purchase an RS supplement, usually made form corn, if you want to boost that amount. Or you can go the natural route. Legumes3 are the best source. Cooled, cooked potatoes are a close second. Green bananas for the hardcore.

By the way, when study authors say that RS treatment is "well tolerated", I imagine their tongues stuck to their cheeks. There's no way a human can dump oodles of bacteria-food into his colon and not manufacture copious amounts of carbon dioxide, hydrogen, and methane gas. Just no way. (Ok, some people make more than others.) So if you want to try an RS supplement, and you don't know how much to take, let your flatus be your guide.