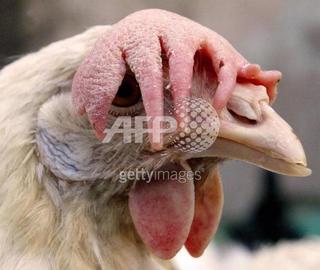 Speaking of prophylactic measures, I'm noting a generous use of some form of the verb "to cull" in news stories that discuss avian flu. Not sure what the word meant, especially when used in phrases such as "humanely culled", I looked it up:

cull
verb
1. To pick out from others; select.
2. To gather; collect.
3. To remove rejected members or parts from (a herd, for example).

I didn't think it had anything to do with extinguishing life. But when a bird is found dead, and it's discovered to have met its demise via H5N1, and the rest of the flock is "humanely culled", I conclude they weren't just gathered up and moved to safer ground. "Cull" seems to have taken on euphemistic meaning.

In fact, Wikipedia reports that as of October 20, "more than 120 million birds have died from infection or been culled."

That's a lot of birds. That has to put a dent in global poultry production, not to mention devastating the livelihood of indigenous Asian poultry farmers. And for the bird, well, it seems like such a drastic measure.

I'm concerned about the possible outbreak of a bird flu pandemic. But I'm beginning to recognize the cost of prophylaxis.