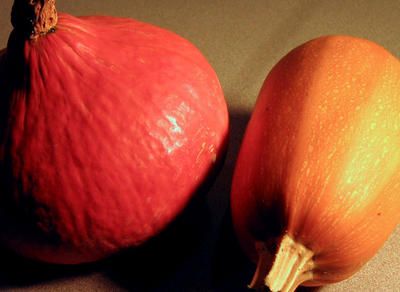 On the left is a sweet potato squash (also known as a red kuri squash). On the right is a spaghetti squash.

I'm about to toss them in the oven, as is, while I do lots of other things. I used to be intimidated by these pretty gourds. I mean, they make nice decorations, but ... eat them? How? Why? I've nicked my bony little fingers too many times carving pumpkins to get enthused about prepping another petrified squash.

Some plants protect their fruits from being eaten by foraging animals by hiding under innocuous cloaks (kiwi, lychee, coconut), others by leaving a memory of an oral cavity on fire (jalapeño, habanero, serrano). I swear the squash has evolved to protect itself by guaranteeing broken molars. I mean, what animals survived by eating these things raw?

As I'm typing they're in the oven softening. The spaghetti squash I'll fork-fluff and eat with tomato sauce. The sweet potato squash will probably get mashed and added to a loaf. Isn't fall great, FRE?
Posted by Bix at 7:23 AM