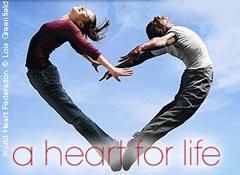 Everyone who knew that please raise your hand.

I'd bet there aren't that many hands.

First, heart disease is the number one killer of Americans. You'd think that something capable of killing 700,000 Americans - each year! - would get a little attention. If a natural disaster, or a terrorist attack, or a bird flu took that many lives, there would be non-stop coverage on all the media outlets - traveling correspondents, in-depth reporting, heart-breaking personal stories. A headline might read, "If nothing is done, 700,000 more are likely to die in the coming months." Would I be going out on a limb if I said that more people probably know someone whose life was ended via heart disease than by terrorism or a disaster?

Second, it was a global event, not a national one. The resources that could have been procured to market such an event were tremendous. In contrast, the Great American Smokeout is just national, but it gets more press.

Third, most death via heart disease is preventable. A prominent World Health Organization (WHO) official1, in a lead-up to World Heart Day, claimed:

"Approximately 80% of heart disease, stroke, and type 2 diabetes, and 40% of cancer could be avoided through healthy diet, regular physical activity and avoidance of tobacco use."

So, Mr. President, while you're allocating federal resources, can you also earmark another $200 billion for prevention of these deaths? They're not a given.

~~~~~~
1 The World Health Organization Warns of the Rising Threat of Heart Disease and Stroke as Overweight and Obesity Rapidly Increase
Posted by Bix at 2:32 PM