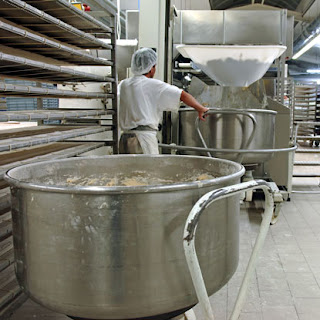 No one knows yet how E. coli 0157:H7 got into the chocolate chip cookie dough, if it's there at all ... Nestle says they still haven't found the smoking dough. (There is compelling circumstantial evidence that the dough is contaminated though.) (Update, Jun 29: They found it.)

"At 10:00 PM last night between yet another story about Michael Jackson’s death, a foreign Network begin airing a video taken inside a manufacturing facility showing someone treating a batch of cookie dough with an unknown liquid. There is a claim that this is a terrorist act.

In the next 15 minutes, every network news operation is playing the video. The broadcast networks break into regular programming to air it, and the cable news stations go nonstop with the video while talking heads dissect it. Michael Jackson fades into the distance.

Coming on a Friday evening on the East Coast, the food terrorism story catches the mainstream Media completely off guard. Other than to say the video is being analyzed by CIA experts, and is presumed to be authentic, there isn’t much coming out of the government."
- Bill Marler, "Who Poisoned the Cookie Dough?"

That's fiction. Marler says it's not far-fetched though. And he's not alone in that thinking. Tommy Thompson, the former Secretary of Health and Human Services (a position Kathleen Sebelius just filled), expressed concern about the nation’s food supply on his last day in the job in 2004, saying,

"For the life of me I cannot understand why the terrorists have not attacked our food supply because it is so easy to do."
- Former HHS Secretary Tommy Thompson

When asked if he agreed with Thompson's concern about the food supply, former FDA Associate Commissioner William Hubbard said in a PBS interview in 2007, "I wouldn't disagree with Secretary Thompson."