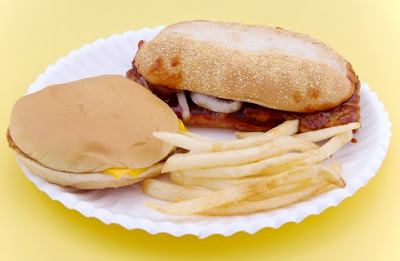 This was the EPIC study (10 European countries), 452,755 men and women completed a dietary questionnaire in 1992–2000 and were followed for cancer incidence and mortality until 2006.

"The association between fruit and vegetable consumption and colorectal cancer risk was inverse in never and former smokers, but positive in current smokers."

2. Cancer Incidence In Vegetarians: Results From The European Prospective Investigation Into Cancer And Nutrition (EPIC-Oxford)

This was an arm of the EPIC study (only the United Kingdom), 63,550 men and women recruited throughout the 1990s.

3. Vegetarian Diets: What Do We Know Of Their Effects On Common Chronic Diseases?

This was a review of this issues' findings.

"A number of studies have evaluated the health of vegetarians. Others have studied the health effects of foods that are preferred or avoided by vegetarians. The purpose of this review is to look critically at the evidence on the health effects of vegetarian diets and to seek possible explanations where results appear to conflict. There is convincing evidence that vegetarians have lower rates of coronary heart disease, largely explained by low LDL cholesterol, probable lower rates of hypertension and diabetes mellitus, and lower prevalence of obesity. Overall, their cancer rates appear to be moderately lower than others living in the same communities, and life expectancy appears to be greater. However, results for specific cancers are much less convincing and require more study. There is evidence that risk of colorectal cancer is lower in vegetarians and in those who eat less meat; however, results from British vegetarians presently disagree, and this needs explanation. It is probable that using the label "vegetarian" as a dietary category is too broad and that our understanding will be served well by dividing vegetarians into more descriptive subtypes. Although vegetarian diets are healthful and are associated with lower risk of several chronic diseases, different types of vegetarians may not experience the same effects on health."

________
So, the first study found that fruit and vegetable consumption was protective against colon cancer, except if you smoked. Then, oddly, eating fruit&veg increased your risk for colon cancer.

The second study found that vegetarianism was protective against all cancers, except colon cancer. In which case, not eating meat seemed to increase risk for colon cancer.

The last study, or review, reiterated previously documented benefits of vegetarianism and, as a way of explanation for the UK study in number 2 above, proposed that some vegetarian diets are better than others.

The photo I used for this post is exemplary of this last point. It could be a photo of a vegetarian meal (using vegetable-based meat analogs like tofurkey or fake bacon: "facon"), or a photo of a non-vegetarian meal with meat.
________
Posted by Bix at 8:36 AM

"Then, oddly, eating fruit&veg increased your risk for colon cancer."

the natural anti-oxidants having an opposite effect in smokers?

my nieces and nephews who are vegan, vegetarian or "whut-evuh", make their nutrition choices based on advice from friends and health food store cashiers...natural cigarettes for dessert...and weight control.

I think they are right. Vegetarian as a category is too broad.

I think it has to be less about eating a "magic" diet and more about simply eating intelligently.

"the natural anti-oxidants having an opposite effect in smokers?"

Don't know. But you saw the exact same thing in a trial that used beta-carotene. They had to stop the trial because smokers (and smokers only) taking the anti-oxidant were getting lung cancer at rates higher than non-beta-carotene takers. The effect lasted for years after they stopped taking beta-carotene too!

The Home Depot near us smells like that. They sell hot dogs in the foyer entrance. "Entice" is not a word I'd use to describe it.

Laughing! I should have used that as one of the diet options.

"smokers only) taking the anti-oxidant were getting lung cancer at rates higher than non-beta-carotene takers."

so, just wondered if a similar effect might be seen with fruits and vegetables, and if would that explain the increased risk for smokers? perhaps artificial supplements stay in the body for years (still affecting past smokers), but naturally occurring beta carotene etc exits quickly, and ex-smokers, then, have the same risk as non-smokers.

Yes, I thought that was what you were saying. You always see the link between things.

And I agree with you. I suspect antioxidants are a problem. They quench free radicals that act as messengers.

And really good point about beta-carotene. It's fat soluble. So if you took a lot (as you can do easily with a supplement) it gets stored in your fat, and stays around for a long time.

It seems the studies at best are inconclusive about what foods increase or decrease the risk of colon cancer. There are so many confounding factors to consider.

I still feel too much meat (> 8oz. per day), especially red meat, is not good. Most Americans eat more than 8 oz.

I also think a diet of mostly fruits, vegetables, grains and nuts with a moderate amount of meat (>6 oz.per day) is best. If it doesn't reduce colon cancer risk, at least it reduces cardiovascular disease and diabetes.

Staying fit and trim by not overeating and daily exercise is also important.

Or, maybe, these population studies are pretty much useless.

Unless, of course, you happen to agree politically with the conclusions.