Keep An Eye On The Birds 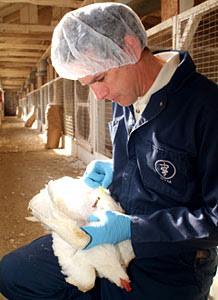 Just a few days ago, a supplier for Tyson killed 15,000 chickens because they were infected with bird flu:

"The 15,000 birds showed no signs of illness and there appeared to be no threat to human health, Tyson said."

So why did they kill them? Of course there's a threat. It may not be from this virus exactly, but as I wrote in the prior post, viruses are evolving, "disintegrating and reforming," at a furious pace. Keeping a genetically uniform and isolated flock of birds cooped up inside, in unnatural, space-starved quarters is a recipe for illness - not just among birds. Tyson knows this.
________
Photo from Tyson Foods, Inc. Caption:

"A senior veterinarian for Tyson Foods takes a blood sample from a live chicken at a poultry farm near Springdale, Arkansas. Such samples are subsequently sent to a Tyson laboratory where they are tested for the presence of avian influenza."