Americans' (Vertical) Growth Has Stagnated, Poor Childhood Nutrition Could Be To Blame

The OECD (Organization for Economic Co-operation and Development), a group of 30 developed countries, just published its 2009 "Society At A Glance" report. Lots of great comparative data here.

One piece the authors found interesting: The height of Americans:

KEY FINDINGS: UNITED STATES
"Adult height: Americans are not getting taller. The United States is the only country in the OECD where men and women aged 45-49 are no taller than those aged 20-24 years old, indicating no improvement in health and social conditions determining gains in height. All other 22 OECD countries are seeing greater height gains between these two generations."
- OECD (2009), Society at a Glance – OECD Social Indicators, Key Findings

Click to enlarge.
Why aren't we getting taller? It's not immigration:

"The poorest performer is the United States, where there have been no height gains over a generation. Immigration of comparatively short people in recent times cannot explain height stagnation in the United States."
- OECD (2009), Society at a Glance – OECD Social Indicators, Health Indicators: Height

It could be childhood nutrition:

"Adult height gain indicates country improvements in childhood net nutrition. ... Child poverty [in the US] has fallen since the mid-1990s but one in five US children still live in poverty, a rate exceeded only in Poland, Mexico, and Turkey."
- OECD (2009), Society at a Glance – OECD Social Indicators, Key Findings

Here are the comparative heights: 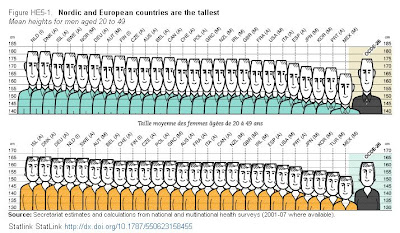 "Males in the Nordic and Northern European countries are the tallest. The shortest men are found in Mexico, Portugal, Korea, and Japan. Similar country patterns [exist] for women.

There is little strong evidence that these country height differences are due to average country differences in genetic endowments (Deaton, 2007).

Little evidence that these differences are due to genes. How about that.
________
Thanks to shaun who sent this link which referenced the OECD report (great discussion there):
Obesity and the Fastness of Food, NYTs, May 5, 2009
Posted by Bix at 1:58 PM

Perhaps our lack of height gain is due to our genetically modified over-processed fast food western diet that has quickly evolved in the last 30 years. Don't worry. Other countries are moving to our diet and their height gain will stop too.