What Happens To The Pigs?

... during a swine flu outbreak? 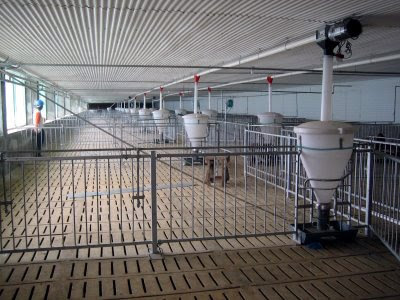 Paul Roberts, in his book, The End of Food, wrote about what happened to birds, in this case chickens, during a bird flu outbreak that occurred in Canada in 2004:

"On February 15, 2004, Dr. Stewart Ritchie, a veterinarian in British Columbia's Fraser valley, got a troubling call from a local egg farmer."

"Stew," the farmer said, "something serious is going on here."

The egg farmer was calling to say his birds weren't well. Some had been treated for a low-grade virus, but...

"Although the virus in the first barn was a mild, or low-pathogenic, strain, the bug had rapidly mutated into a high-path strain by the time it reached the second barn, and it now threatened not only the valley's eighty-million-dollar poultry industry but its human inhabitants as well.

Canadian officials opted to depopulate the farmer's eighteen thousand chickens and isolate the farm within a three-mile biocontainment zone."

What happened next has become a case study in the vulnerability of the modern food system. Efforts to euthanize the sick birds went almost comically wrong. Workers pumped the barns full of carbon monoxide, which didn't kill the birds but did blow virus particles out of the barns and into the surrounding air. A second strategy -- electrocuting the birds -- bogged down because the stunners were designed for old, or spent, birds, which are mostly skin and bones whereas the infected birds were large and fat; their executions generated huge plumes of greasy, virus-laden smoke, feathers, and other poultry particles.

Within three weeks, the virus had reached three other chicken farms and eventually spread to forty-two farms, requiring the culling of nineteen million birds.

Then on March 16, came word that a health worker with flulike symptoms had tested positive for H7N3: the virus had gone zoonotic."

This virus was not that virulent and the outbreak subsided. However, "attention quickly shifted to the massive tasks of disinfecting hundreds of poultry barns, and disposing of forty thousand tons of chicken carcasses."

With all due respect to the the human swine flu victims, I wonder what will happen to the pigs in Mexico.
________
Photo of a disinfected hog farm in the Philippines from Adrian Ayalin's blog lagalag.
Posted by Bix at 9:57 AM

Eesh, I know chickens are resilient to some nasty conditions, but surviving electrocution and carbon dioxide is superhero like. And yet we treat them like some sort of sub-animal. They don't ask for much, and we still give them nothing.

"Depopulate"
What a word.

I have been know to depopulate a room since I've been on the bean diet.

Where the hell do you dispose of 40,000 tons of chicken carcasses? (In pet food?) God, I just hate this. And those poor pigs (and the poor chickens). Pigs are amazingly intelligent & sensitive. What a tangled web we weave as humans. Disgusting. Sorry, this sort of situation just makes me so angry. It exemplifies all the worst about humanity.