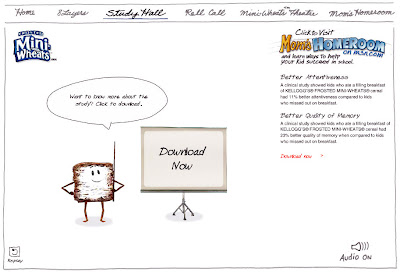 Kellogg's fed children a breakfast of either their Frosted Mini-Wheats cereal or a glass of water. They then gave them "a series of tests each hour for three consecutive hours."

"A clinical study showed kids who ate a filling breakfast of KELLOGG'S FROSTED MINI-WHEATS cereal had 11% better attentiveness compared to kids who missed out on breakfast."

"A clinical study showed kids who ate a filling breakfast of KELLOGG'S FROSTED MINI-WHEATS cereal had 23% better quality of memory when compared to kids who missed out on breakfast."

What do you think?
________
Here's what the Federal Trade Commission thinks:

"The [FTC] alleges that both of the challenged claims are false and violate federal law."

Kellogg's this week agreed to settle the FTC charges. The settlement also "bars deceptive or misleading cognitive health claims for Kellogg’s breakfast foods and snack foods and bars the company from misrepresenting any tests or studies."

You know there's more of these "studies" out there.
________
- Illustration from Kellogg's site: http://fmw.kelloggcompany.com/study-hall/. I wonder if it will still be there next week.
- I found this news via CSPI (Center for Science in the Public Interest), Federal Trade Commission Stops Kellogg from Claiming Frosted Mini-Wheats "Improve Kids’ Attentiveness" in School.
- When did we start calling children "kids?" I thought a kid was a goat.
Posted by Bix at 9:02 AM

So if I don't feed my child he will do worse on cognitive tests. . . Isn't that what they are really saying? I'm just surprised that anyone would think this had anything to do with the specific product itself. I guess that's the point. The correlation is clearly not there. All I can say is I bet someone in marketing is updating their resume.

in other words, eat breakfast, whether it's kellogg's cornflakes or a glass of milk with a piece of toast

i just read about america was "cerealised" by post and kellogg ! the book organic is good info - i suppose

New marketing slogan: KELLOGG'S FROSTED MINI-WHEATS....better for breakfast than a glass of water!

I was "cerealized" as a child. I'm probably still paying for that.

may be you already know-http://www.verticalfarm.com/index.html --

Anrosh, how about that. I'd read about vertical farming but these are the first pictures I've seen.

I see the advantages. And I guess this would mesh with the locavores?