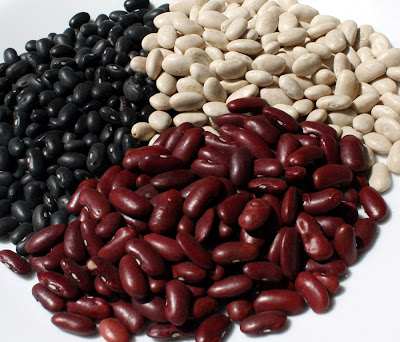 Meat (red and processed) was just found to be associated with increased mortality - from cancer, heart disease, and other causes - in the largest prospective study (over half a million participants) investigating this link to date.

So, what may decrease mortality?

Beans. At least mortality due to breast cancer. So suggest the findings of this study that has also been making headlines:

Researchers fed beans to rats. The number of rats that developed breast cancer (after being injected with a carcinogen) was 95% in the non-bean control group, and only 67% in the bean group. That's impressive.

Not only did beans reduce the incidence of cancer (how many rats developed tumors at all), but it also reduced the number of tumors in a rat that did get cancer - from 3.23 tumors down to 1.46. That's impressive.

Notice that in each of those three groupings (races), one bean was white or pale, the other was dark or colored. The researchers were trying to determine if there was something about dark-colored beans that gave them an edge over light-colored beans, since dark beans are known to be higher in antioxidants.

In fact, all three of the dark beans above were found by these researchers to be orders of magnitude higher in total phenolics and flavonoid content - both indicators of antioxidant content. The dark beans also displayed more antioxidant activity, as measured by an ORAC assay (Oxygen Radical Absorbance Capacity).

So, you'd think the dark beans would be better at inhibiting breast cancer? I thought that. They weren't. In this study, it mattered more what the heritage of the bean was (from where it was domesticated), than what color its seed coat was or what its antioxidant capacity was.

Although all beans reduced the cancer response, those from Andean heritage (white kidney and red kidney) performed better than the others (great northern, small red, navy, black). The improved performance of Andean beans was statistically significant.

Not only was the color of the bean not associated with anticancer activity, there was also no link found for protein content, fat, fiber, ash, or nitrogen-free extract.

The researchers were at a loss to describe just what it was about beans that gave them a strong anticancer effect.

I should note - the levels of antioxidants in cooked beans were markedly lower than in uncooked beans, to the point of being undetectable. This is because many antioxidant compounds are water soluble, leach into cooking liquid, and in this case were drained away. That didn't matter --> the cooked, drained, dried bean powder (with almost undetectable antioxidants) used in the study still had potent anticancer activity.

So, what do you think it is? What is it about beans? (I have a few ideas.)
________
Note: Beans are not compatible with a number of diets, notably Low-carb diets (Atkins, Bernstein, Protein Power, and others) because of beans' carbohydrate content; Paleolithic or Caveman diets (Loren Cordain) because beans were not available in quantity during hunter-gatherer periods; Raw Food diets since sprouting alone doesn't improve digestibility enough to consume them in quantity; Locavore diets unless the beans were grown locally; and Breatharian diets whose followers claim food is not necessary.

Photo: That's a photo of some beans I had in my kitchen. The white are Great Northern Beans, the red are Dark Red Kidney Beans, the black are also known as Turtle Beans.
Posted by Bix at 8:45 AM

Beans allow you to expel toxins from the body in a gaseous manner.

Good grief, I thought you were joking about Breatharian--but it's *true*!!!
Re what gives beans their anticancer activity, I might guess fiber, but I suppose they all have fiber, so perhaps not. I doubt it's the iron.... Relatively low glycemic load? I really have no idea! I like Ronald's answer!

Melinda, I didn't think anyone would notice that.

They tested fiber, but only "crude fiber," and didn't find any correlation. Although your thinking is in the ballpark of my thinking ... maybe it's some secondary effect of some carbohydrate component (fiber is a carb component).

The carb component could be a resistant starch or a type of fiber (soluble? fermentable?) that would (is known to) decrease insulin resistance (IR) (increased IR is linked to breast cancer), or that binds to estrogens and removes them via feces (estrogen removal decreases hormone-dependant cancers).

Another idea ... Something could be inhibiting the activity of aromatase. Aromatase is an enzyme that converts male hormone (or precursors) to female hormone. If you inhibit aromatase (as some drugs are designed to do) you make less female hormone, and so you decrease cancer risk.

By the way, alcohol is a known aromatase enhancer (in both men and women), which means the more alcohol you drink, the more female hormone you make. That's one theory behind the link between alcohol consumption and breast cancer.

So one possible takeaway here is to eat beans with your booze to cancel each other out? ;-)

I'm glad to have seen this post, Bix. Thank you. So often the media report when something is found to increase risk of cancer (also helpful information, certainly), but it's nice to read about something that could prevent it.

Or maybe it's just my perception. I'm still reeling from the study that essentially said that any amount of alcohol in women can increase the risk. I like wine, so that one hurt, I gotta tellya.

Nice of you to add the comment on how this might not fit in with some so called 'diets' out there.

In my two years of actively pursuing a healthier eating lifestyle I have come to the conclusion that balance is the key.

The trick to me is to find the bits of information that make sense to you in the space and time you are at at the moment and use your best judgments to come up with a sensible eating plan. You can go low carb sometimes, low fat sometimes, low protein sometimes, or the opposite, but balance it out and keep it REAL - I love what Suzanne Somers says:

bix -- i am getting confused here.

And the bean before cooking which is all protein is now considered a carbohyrate with some antioxidant properties ?

so i should consider powedering the bean ( for best results ) and not soaking and cooking them ?

1. Yes, when you cook the bean and drain it, you drain away antioxidants. (As you said, you drain away some oligosaccharides that cause gas too, which can be preferable.)

2. You should, by all means, cook beans. You can soak them before cooking or not. (You could sprout them but that wasn't tested in this study.)

3. The beans used in this study were boiled, then canned. The cans were opened and drained. The remainder, which had few antioxidants left, were dried and ground to a powder (after being cooked), then added to the rat's food. (The rats ate a lot, 60% of the dry weight of their food.) Even after all that processing the beans still had anti-cancer properties.

4. Cooked beans are still relatively high in protein. A half cup cooked kidney beans have about 7 grams of protein.

Ruby, I am trying to deal w/ the same issue (enjoying my wine but not wanting to up my risk of b. cancer). I've cut way back on the amount I drink, and I mix it w/ water (like the French, only more water) and some de-alcoholized wine--Ariel brand).

But just recently I read an article--and I'm frustrated that I can't remember where--that said that women who drink (hopefully moderately) need to balance the heart/cardio benefits of moderate drinking against the breast cancer risk. So you look at your family history--is there a strong history of heart problems and very little cancer? Then consider drinking, but in moderation. If vice versa, then try to avoid drinking. The article also suggested making sure you get plenty of B vitamins, as for some reason, they seem to combat the deleterious cancer-risk effects of moderate drinking.

Bix, you may have some thoughts on this--meantime, if I can find the article, I'll post the link.

Further to my previous comment to Ruby about moderate drinking, I finally found the articles--linked to NutritionData blog. Here are two of them: http://blog.nutritiondata.com/ndblog/2009/02/todays-poll-wil.html
http://stayhealthy-livewell.com/articles.php?id=6

Here's a link to the original research re drinking--and it's folate or folic acid specifically among the B vites that's the significant nutrient, according to the study.
http://www.bmj.com/cgi/rapidpdf/bmj.38551.446470.06v1
You can complete a free registration to look at BMJ articles.

Hey Bix, you'll be happy to hear that your favorite new food, lentils, also have lots of folate! I was researching it a bit; beans themselves have a lot--white rice (long grain), of all things, has a huge amount of folate, acc. to USDA! Who woulda thunk? Here's the USDA link:
http://www.nal.usda.gov/fnic/foodcomp/Data/SR21/nutrlist/sr21w435.pdf

Thanks, Melinda. I didn't know that about lentils.

Back when I was in school, the absolute best source for folic acid was green vegetables. Leafies. I used to remember the word "foliage" as a clue on tests for what foods had the most folic acid.

But in 1996 (seems like yesterday to me) just about all commercial grains in this country, as I recall that included white rice and of course wheat flour, were enriched with folic acid ... because young women weren't getting enough and the risk of neural tube defects (spina bifida) were relatively high. Incidence came down since enrichment.

So, now, if I was in school, "foliage" wouldn't get me though a test as well. How things change.

Enriched, of course--I was just scanning it and didn't notice. I love "foliage" as a mnemonic! But at least beans and lentils have it naturally, along w/ greens.